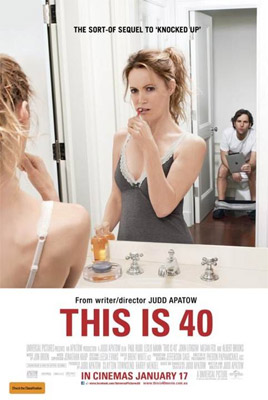 Synopsis: Writer/director/producer Judd Apatow (The 40-Year-Old Virgin, Funny People) brings audiences This Is 40, an original comedy that expands upon the story of Pete (Paul Rudd) and Debbie (Leslie Mann) from the blockbuster hit Knocked Up as we see first-hand how they are dealing with their current state of life.

Verdict: This Is 40 is the "sort of sequel to Knocked Up" following Pete and Debbie as their kid's age - and unfortunately, they do too.

14 years of marriage, has taken its toll and Debbie thinks that by making a "do better list" they can take hold of their lives; their lives that seem to be getting harder and crazier, by the day. With two mortgages, two businesses, two kids, one father that acts like a kid and the other seems not to even exist between seven year visits; things are tough!

Paul Rudd and Leslie Mann come together, again, as the very funny couple with hilarious support from Jason Segal, Chris Odowd and Melissa McCarthy; these talented actors guarantee a laugh!

Some of the funniest moments, for me, were from the kids (who are actually the children of couple Judd Apatow (Director) and Leslie Mann) who really showed just how hard it can be for parents of children going through the teenage years.

This Is 40 is a hilarious movie about working, raising kids, helping your family and trying to stay sane all at the same time as appreciating what you have.