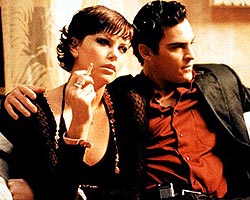 Also featured on the DVD are cast biographies, theatrical trailer and previews for Boiler Room and The Hurricane.

After taking the rap for friends and serving time in prison, Leo Handler (Wahlberg) returns to the one place he thinks will be safe, his home.

He takes a job with his uncle, Frank Olchin (Caan), a highly influential businessman in charge of the yards of the New York subway. But in the yards, safe is not how they do business and Leo soon finds himself trapped in a world of pay-offs, sabotage and murder. When he uncovers secrets best left unearthed he becomes the target of the most ruthless family in the city - his own.

THE YARDS runs for 110 minutes, is rated M15+ and will be available to rent on video from January 23rd.