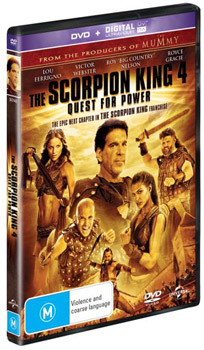 After the King of Norvania is assassinated, the legendary Scorpion King Mathayus (Victor Webster) is betrayed by a trusted friend and framed for the crime. Now Mathayus and his only remaining allies, a mysterious woman (Ellen Hollman) and her unconventional father (Barry Bostwick), are the last hope to stop an evil heir from seizing control of the throne.

Together they must muster all their strength to fight off an entire kingdom of soldiers and outwit their formidable opponent, who will stop at nothing in his quest to unlock the ancient and almighty mystical power.