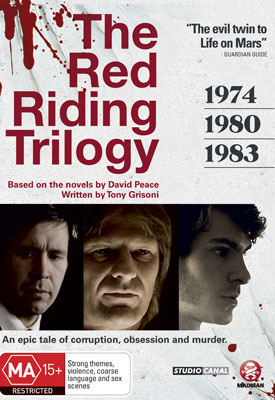 An epic tale of murder, corruption and obsession.

Compelling, complex, gripping and genuinely disturbing, The Red Riding Trilogy is a breathtaking, neo-noir epic based on horrific, factual events and adapted for the screen by Tony Grisoni from David Peace's series of groundbreaking novels. The Red Riding Trilogy follows controversial stories revolving around the manhunt for the brutal Yorkshire Ripper. After a failed attempt to crack Fleet Street, a cynical journalist returns to his homeland of Yorkshire and finds himself assigned to report on the case of a local girl who has gone missing. But after her bizarrely mutilated body is discovered, he is thrown into a sleaze infested, nightmarish world of corruption. As the killer's identity remains a mystery, savage events spiral out of control, spanning generations and leading to a shocking climax.