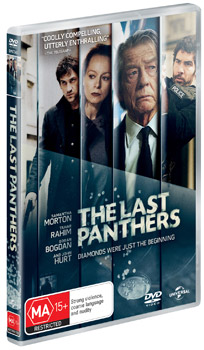 At the beginning of the millennium, major cities across Europe were targeted in a series of daring jewellery robberies carried out by the -Pink Panthers' – a gang famed for their bold daylight raids and movie-style getaways. But after terrorising Europe's jewellers for a decade, they suddenly disappeared.

Now, a heist in the south of France bears all the hallmarks of the Panthers. What starts with diamonds, leads to guns, drugs, high-finance and involves the corridors of power in the European Union, the City of London and the murky world of Europe's criminal underworld, uncovering a new breed of criminal – the -Banksters'.

Inspired by the true story of the -Pink Panthers', the international jewel thief network who were responsible for over $500 million in diamond robberies, follow this globetrotting crime thriller through Belgrade, London, Marseille and Montenegro in The Last Panthers, yours to own on DVD from June 9, 2016.