How to be Single DVD 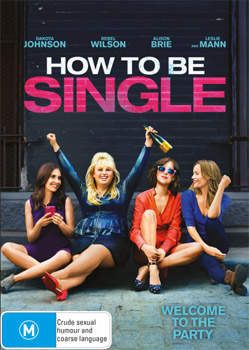 How To Be Single DVD

There's a right way to be single, a wrong way to be single, and then…there's Alice. And Robin. Lucy. Meg. Tom. David. New York City is full of lonely hearts seeking the right match, be it a love connection, a hook-up, or something in the middle.

And somewhere between the teasing texts and one-night stands, what these unmarrieds all have in common is the need to learn how to be single in a world filled with ever-evolving definitions of love. Sleeping around in the city that never sleeps has never been so much fun.

How to Be Single is an American romantic comedy film based on the novel of the same name by Liz Tuccillo.

Review:  As to be expected this is a fun movie exploring different types of relationships and finding yourself. Highly recommend this for a great night with friends or a pick me up.

Michelle rated the DVD "How to be Single DVD" 9/10 Stars on Femail.com.au. Fun, Fabulous and Entertaining