The Flight of the Red Balloon 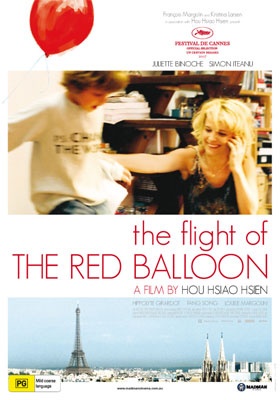 A mysterious red balloon affectionately follows seven-year-old Simon around Paris. His mother Suzanne is a puppeteer who uses her vocal talents to bring life to the shows she writes. Completely absorbed in her new show, single mother Suzanne becomes overwhelmed by the complications of modern daily life. She decides to hire Song Fang, a Taiwanese film student, to help her care for Simon.

FLIGHT OF THE RED BALLOON is the first film in a series initiated by the president of Paris'Musée d'Orsay, Serge Lemoine, and the production, in conjunction with the museum's 20th anniversary. Theidea is to bring together contemporary artists, in this case world class filmmakers, and the museum'sImpressionist or Art Nouveau treasures.

The terms are particularly simple: the museum must be present, either throughout the film or just a scene.This is how Hou Hsiao Hsien came to scout locations for the first time in Paris.This was the starting point for the adventure of this film: FLIGHT OF THE RED BALLOON.

When did you first see Albert Lamorisses film The Red Balloon?

When Francois Margolin, on the behalf of the president of the Musée dOrsay, came to seeme and invited me to make a film with them, I agreed and started researching what I mightdo. I met people, read about Paris, read about French cinema - and I found out aboutLamorisses film and watched it.

I also read a very useful book, published in France. Its called Paris to the Moon and its by anAmerican, Adam Gopnik. I think I related to this book because its written from theperspective of an outsider, and it became my guide to Paris. From the book I learned aboutthe childrens toy called -The Machine for Drawing the World,” which I used in the scene inwhich Simon and Louise draw pictures. Gopniks book taught me many other things too,such as the fact that there were pinball machines in many Parisian cafés in the old days. Healso writes about the game on the merry-go-round in the Jardin de Luxembourg: the kids onthe ride have little sticks, which they try to push through the small metal ring as they go past.I put that in the film, too.


Coming to Lamorisses film fifty years after it was made, what did you make of it?

My first reaction on seeing it was that it showed certain realities of Paris in 1956. It showsthe citys ambience, and the social system of the time. The focus on the various constraintssurrounding the child is revealing: he is forbidden to do things at home, at school, on thebus … He doesnt have enough space to live, but at the same time the film gives a sense ofthe new, post-war freedoms around him. Kids today dont have such freedoms. I didntthink of the red balloon itself in metaphorical terms; I think the film shows cruel realities.


How well did you know Paris before making your film?

Id visited the city two or three times and seen the tourist sights. Once the film was set up, Itook every chance to visit and spent as much time as I could exploring the city.


There are certain similarities between your approach to Paris and your approaches to Tokyo in CaféLumiere and to Taipei in Three Times. You anchor your stories in the topography, culture, history andeveryday life of the cities ...

Before making Café Lumiere, Id never imagined that I could make a film abroad. I didnt feelI knew well enough how people lived in other countries and other cultures. During the CaféLumiere shoot I gave the actors certain freedoms to do things their own way, and the resultswere quite pleasing. And so I approached this film the same way.

I start with the locations. The first thing this time was to find Suzannes apartment. ThenSimons school. What time does it come out? Where is it in relation to the apartment? Whereis the puppet theatre where Suzanne performs? Once all of these concrete things areestablished, I can start work on the script.


Your Paris has a distinctly Chinese flavour, though, thanks to the casting of Song Fang as the child-minderand to the puppet play that Suzanne narrates.

I met Song Fang at the Pusan Film Festival when I was the dean of its first Asian FilmAcademy and she was one of the students. I talked with her and found she spoke fluentFrench; shed spent years in Brussels and Paris, and was then studying at Beijing FilmAcademy. Meeting her inspired the character she plays, who is not untypical of MainlandChinese in France. Plenty of Taiwanese students go to France to study, but hardly any ofthem work as child-minders. On the other hand, lots of Mainlanders do.

The puppet play that Suzanne narrates derives from a Yuan Dynasty play. Director BaiJingrui wanted to adapt it as a movie for many years, but never did. Versions of it are oftenperformed in Taiwanese puppet theatres. About five years ago, the magazine Cahiers ducinema asked me to write something about Truffauts cinema, and this play came to my mindright away. I associate Truffaut with single-minded, persistent characters, and this ancientplay offers an archetypal image of persistence.

Its hard to find people who are truly persistent in that way these days, but I think Suzanne islike that. She narrates the story of Zhang Yu, the scholar who tries to boil away the ocean toretrieve his beloved Qiong Lian, and her own domestic situation is analogous: shes stuck inan emotional impasse, and is determined to help herself out of it through her own efforts.


How much of a film like this do you script in advance? Just the overall structure, or is it more than that?

I have a full script, but without the dialogue. Each scene is discussed in detail with theactors, who invent their own dialogue to fit the situation. This worked fine in general but Ihad a problem with the child actor who plays Simon. There are strict regulations on thehours that children are allowed to work, and I had only thirty days in total to shoot the film.I wasnt satisfied that Id captured the childs feelings very fully, and that led to a lot ofadditional work in the editing and post-production.


How well did Juliette Binoche adapt to this way of working? Presumably shes used to having a dialoguescript to work from?

We didnt have that much time for preparation, and I met Juliette only three times before westarted shooting. The first time, she wasnt ready and couldnt come up with any dialogue.The second time was not much better. But the third time, she arrived as Suzanne. Shedentered the character, knew her hair colour, knew how she talked, everything. When youwork with actors as professional as Juliette Binoche is, you can expect to get that kind ofcontribution from them.

I had a similar experience with the parents in Café Lumiere. Theyre both professional actorsand their contributions ended up defining the characters they played. The man decided thathe should be taciturn, almost silent, and the woman played off that, becoming more nervousand insecure.


Do you give the actors full back-stories to work with?

Yes, I write as much background as possible, in great detail. For example, we decided thatSuzannes father and mother met in 1968 and later divorced. They ran a printing business inParis. When they divorced, the apartments went to the wife, who bequeathed them toSuzanne. Suzanne had Louise by her first long-term partner. When that relationship ended, Louisewent to live with her grandfather (Suzanne's father) in Brussels. Pierre (Simons father) is thusSuzannes second long-term partner, a novelist; he went to Canada as a writer-in-residencefor a university in Montreal. Most of this detail is never mentioned in the film, but becausethe actors know it all they can draw on it and refer to it when they need to.


This is the second film youve made in which puppet theatre is a central motif. What draws you to this veryspecialised art?

When I was young puppet shows were often staged in front of temples and I saw themmany times, and so puppet theatre always looms large in my own memories. I even tried tomake my own puppet shows when I was a kid. In this film, it was thinking about thepersistence of Suzannes character that led me back to puppet theatre. The story of ZhangYu is a staple of the puppet theatre, and so I wanted to use that in some way. But this is aFrench movie, and so I had to find a way to integrate a Chinese puppet-theatre story into aFrench narrative. Thats how I came up with the idea that Suzanne would be a creator andvoice performer of puppet shows in Paris.


- from an interview by Tony Rayns, conducted at Spot Cinema in Taipei in March 2007,translated by Chang ChuTi.