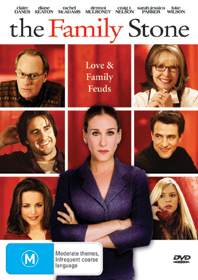 Engage in the laughter, feel the love, and experience the dramatics that unfold at the annual gathering of the New England family - the Stones, when The Family Stone is released on DVD (May 3). Like many family gatherings, before this visit is over relationships will unravel, new ones will form, secrets will be revealed, and the family Stone will come together through its extraordinary capacity for love.

Led by Sarah Jessica Parker in her Golden Globe nominated performance as Meredith, the uptight girlfriend of the Stone's favorite son, an all-star cast joined to make up the quirky and protective family. Others in the family include Diane Keaton, (Father of the Bride); Claire Danes (Shopgirl); Rachel McAdams (Wedding Crashers); Luke Wilson (Legally Blonde); Dermot Mulroney (My Best Friends Wedding); Ty Giordano (A Lot Like Love); and Craig T. Nelson (The Devil's Advocate).

DVD SPECIAL FEATURES
Delve further into this nontraditional family through the wide selection of special features included on the disc: