The Company You Keep DVD 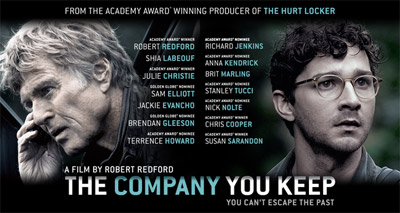 The Company You Keep DVD

Robert Redford directs and stars in this richly engaging story based on the lives of former Weather Underground activists. Nick Sloan (Robert Redford) has been wanted by the FBI for over 30 years, living out his years posing as an attorney under an assumed name.

When one of his former cohorts is arrested, a young enthusiastic journalist, Ben Shepard (Shia LaBeouf) is compelled to investigate and stumbles across Nick's true identity. As Nick is forced on the run, Ben discovers that the history of his case isn't as clear-cut as the authorities claimed it to be.

Robert Redford's elegant thriller is full of brilliant performances and not only functions as an exciting man-on-the-run thriller but also maturely examines conflicting ideals and priorities in a changing world.

The Company You Keep