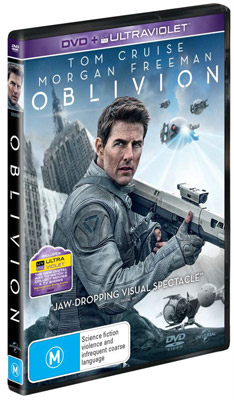 Tom Cruise (three-time Golden Globe® Award winner and Academy Award® nominee) and Morgan Freeman (Academy Award®, Golden Globe® and Screen Actors Guild Award® winner) battle to save the world in Oblivion, their first movie together and this year's ground‐breaking cinematic event from the director of TRON: Legacy and the producer of Rise of the Planet of the Apes.

On a spectacular future Earth that has evolved beyond recognition, one man's confrontation with the past will lead him on a journey to redemption and discovery as he battles to save mankind. Oblivion is set to be one of the most spectacular yet realistic feeling sci‐fi movies for years and is a home entertainment experience not to miss.

In Oblivion, Jack Harper (Cruise) is one of the last few drone repairmen stationed on Earth. His mission, to extract vital resources after decades of war with a terrifying threat known as the Scavs, is nearly complete.

When Jack rescues a beautiful stranger from a downed spacecraft, his soaring existence from thousands of feet above is brought crashing down. The stranger's arrival triggers a chain of events that forces Jack to question everything he knows about life, while simultaneously putting fate into his hands.