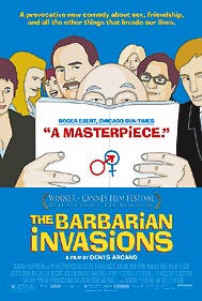 A provocative new comedy about sex, friendship, and all other things that invade our lives.
Synopsis:
From French-Candian writer/director Denys Arcand (Jesus of Montreal) comes a touching, true and open hearted film about the varying politics - economic, personal and sexual - at play among a group of friends, lovers and ex-spouses. Arcand brings the cast of his 1986 breakthrough film The Decline of the American Empire to the screen in this story of life and love.


My Verdict:
Dont let the title of the this movie put you off it has nothing to do with barbarians as such the title is a book title that is referred to in the movie. The Barbarian Invasions tells the story of French/Canadian Rémy, who has terminal cancer. Rémys semi-estranged son, Sébastien is persuaded by his mother, to visit him and try to re-connect with his father. Sébastien is a wealthy successful financier working out of London and he does fly home to be with his father, albeit reluctantly. His first meeting with his father takes place in the public hospital which is under staffed, under funded, you know the drill! Sébastien doesnt like the idea of his father being in the public system and pays via bribery to have his father transferred to a closed floor.

Rémy and Sébastien still dont know how to get along, even knowing that their time together is limited and so Sébastien phones all of his fathers closet friends to come and share some of the last days of his life together. This allows for some great interaction between the main characters as they all reminisce and share Rémys last days. There is Rémys wife, a mistress and her daughter, another mistress, a gay friend and his partner, and another male friend who lets them all gather at his holiday home. The scenery is secondary to the witty, intelligent and poignant verbal exchanges between the gatherings. There is also a very, very emotional scene near the end of the movie as each person says goodbye in his or her own special way to Rémy - keep the tissues nearby.

"The Barbarian Invasions" is in French and English with subtitles, which was a little frustrating at times, however, this is a small price to pay for a thought provoking, moving story of where we have been, where we are possibly going, and just who with. It thoroughly deserved the Oscar for best Foreign Language Film at this years Academy Awards.