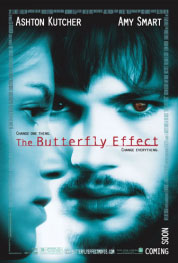 Change One Thing. Change Everything.

Synopsis:
The butterfly effect (a premise of chaos theory) suggests that if a butterfly flaps its wings in one part of the world it can cause a storm in another part. More precisely, the flapping of the wings produces a tiny change in the state of the atmosphere that, over time, can result in a much larger effect. With this concept in mind, the movie, 'The Butterfly Effect' watches what happens when a man tries to make changes to the past in order to improve the present.


My Verdict:
Ashton Kutcher has been ridiculed in the past for some of his roles with a cry of 'grow up'. With 'The Butterfly Effect' he is trying to do just that by taking on a dramatic role instead of his usual comedic roles and for the most part he pulls it off quite well. Ashton plays Evan Treborn, a young man with a history of losing track of time, mostly via blackouts. His childhood is a haze with horrific events he can't remember. He has his childhood friends Kayleigh (Amy Smart), Lenny (Elden Henson) and Tommy (William Lee Scott) and uses them to piece together some of the events. His father is in a psychiatric institute and he and his mother, Andrea, (Melora Walters) begin to question whether he has acquired his father's illness. Tests disprove this at first, but Evan is not so convinced.

Evan then decides to explore his past via his written journals, which a psychologist suggested might be a way to keep track of his past. It is whilst reading one of his entries in the journal that he is violently thrust back into the past. It is here that Evan comes to learn that he can change the past, to alter his future. He decides to do this but the outcome is not something he expected. He decides to go back again, and still the outcome is tragic so he goes back into his past again, and again. He soon comes to realise that he will never be satisfied with his future because there will always be an element of sadness somewhere.

'The Butterfly Effect' is a thriller and has some of those moments which make you jump in your seat - who doesn't enjoy a good scare? It also has some disturbing scenes which might make it unsuitable for children, especially as these involve children in distressing situations - being sexually abused and the death of a pet included.

Ultimately this movie poses the question, "What if we had the power to travel back in time and alter our own personal history?" Would you? It is a fascinating question.