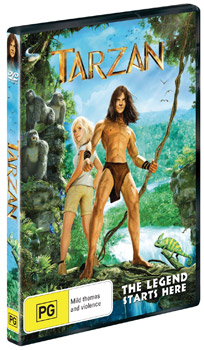 The much-loved classic tale, Tarzan, has been reimagined with spectacular 3D animation to bring Australians the most eye-catching adaptation yet. Featuring the voice talents of Twilight's Kellan Lutz and Resident Evil's Spencer Locke, this is Tarzan as he's never been seen before.

Tarzan, or JJ as he's known, is orphaned as a young boy after a terrible helicopter accident kills both his parents. Alone and helpless in the jungle, he is raised as an ape by Kala the gorilla until he encounters Jane, a beautiful human girl, who changes his world forever.

Featuring exotic landscapes and vibrant action, Tarzan creates a magnificently imagined world that will captivate everyone, making it perfect for a night in with the family this Christmas.

Special Features:
Behind the Scenes with Kellan Lutz and Spencer Locke
Animal Shoot
The Making of

The legend of Disney's Tarzan continues in Tarzan & Jane, an all-new movie packed with action, suspese,...