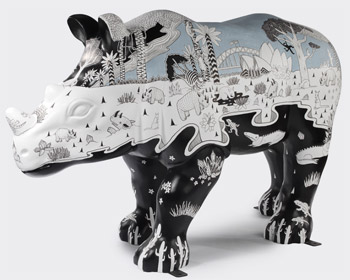 On 2 February, a herd of 125wildly colourful, life-sized rhino and rhino calf sculptures, all adorned with one-off designs by renowned contemporary and urban artists, descended on the streets of Sydney and regional NSW. On Wednesday the 14th of May, the rhinos are set to start the next part of their mission at a special fundraising auction at The Star in Pyrmont, where they will undoubtedly find new and welcoming homes.

The colourful cavalcade of rhinos forms part of a six week long, large-scale public art exhibition designed to raise vital funds for Taronga Zoo's rhino breeding and conservation program, as well as increase awareness of the escalating threat which faces the world's dwindling rhino population. While rhinos might look tough, the Black Rhino population has decreased by 97.6% since 1960 and they remain critically endangered.

The Taronga Zoo Wild! Rhinos project has brought together a diverse selection of noted artists, designers and school students who have used their considerable artistic talents to customise each sculpture and help promote the cause of rhino conservation.

The 14 May auction provides a unique opportunity for members of the public to purchase original artworks from these leading Australian artists, while contributing much-needed funds to rhino conservation. MC for the night, Channel 7's Simon Reeve (Weekend Sunrise, Million Dollar Minute), will preside over this highly anticipated affair, which will feature a who's who of media personalities, A-list stars, art collectors, Wild! Rhino artists and philanthropists. The auction itself will be conducted by Anne Phillips, Director of Art Market Works.

From Saturday Saturday 10th May until 12 noon on Wednesday 14th May the public can head down to The Star in Pyrmont for their very own urban safari, where 45 of the rhinos will be on display together. The public viewing will provide ample opportunity for prospective buyers to survey the works on offer and decide which rhino(s) they'll be adopting.

To purchase tickets for the auction go to www.tarongawildrhinos.org.au Those interested in bidding, but unable to attend, can register for absentee or telephone bidding through the website.