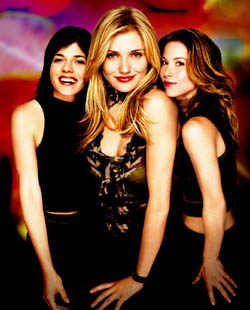 Synopsis: Sexy and bold Christina Walters (Cameron Diaz), after years of avoiding meaningful relationships with men, unexpectedly meets her perfect match (Thomas Jane) one night while hanging out with best girlfriends Courtney (Christina Applegate) and Jane (Selma Blair). When she finds out the next morning that he's suddenly left town, she and Courtney set out to find him on a wild road trip, encountering a series of hilarious misadventures on their journey. Their search ultimately leads them to a surprising discovery and the realization that love is, after all, the sweetest thing.

At a mere 80 minutes long, 'The Sweetest Thing' is the shortest live-action film to hit cinemas in years, which is sweet enough, but the fact that this is genuinely hilarious, is the icing on the cake. Director Roger Kumble, who made dark and surprising 'Cruel Intentions', has crafted an inventive and sprightly comic gem, a film blistering with comic invention, outrageous vignettes and gross-out humour which is actually funny. Take a dash of the Farrelly Brothers and add Nora Ephron to the mix, and you have an idea of what to expect in 'The Sweetest Thing'.

Screenwriter Nancy Pimental set out to devise an irreverent comedy from a young woman's perspective, and thus ironically, women may be the ones most offended by some of its goings-on. Yet there is enough simple heart and emotional resonance to drive 'The Sweetest Thing' to a level above the norm, and combine that with some skillfully played comedy brilliance on the part of its charming trio. Diaz is perfectly cast as the outwardly defensive Christina Walters who ultimately succumbs to her more emotional side, but it is Applegate and Blair that provide us with some brilliantly devised comedy. Neither actors are strangers to the genre and equip themselves with unashamed ease, Blair in particular, who does wonders with gags pertaining to sperm and pink elephants.

Full of visual imagination and impeccable timing, 'The Sweetest Thing' is short, sweet and consistently hilarious, the perfect antidote for these trying times.