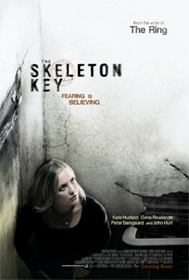 Synopsis:
Strong-minded Caroline Ellis (Kate Hudson) is a driven young woman with no time for local tales of witchcraft and black magic. The young hospice worker is determined tot make enough money to attend nursing school, even if it means taking a job as a live-in caretaker for the elderly owner of an isolated plantation house an hour's drive outside of New Orleans - deep in the atmospheric Louisiana delta renowned for the locals' mystical practices and powerful ceremonies. The decrepit Terrebonne Parish mansion is home to born-and-bred Southerners Violet and Ben Deveraux (Gena Rowlands and John Hurt) and both the house and its occupants seem weighed with sombre histories. But for Caroline, the setting is unimportant - she's there to do her job, caring for Ben after the stroke that has left him nearly paralysed.

My Verdict:
Disillusioned with her job in a hospice, potential nursing student Caroline (Kate Hudson) takes on a high paying job as a live-in caretaker for Violet and Ben Deveraux (Gena Rowlands and John Hurt). The Deveraux's live in a somewhat spooky mansion on the outskirts of New Orleans, deep in hoodoo country and they have had trouble keeping a caretaker as something is frightening them away not long after they arrive. Along comes the earnest Caroline, who becomes curious about the Deveraux's and their mysterious house and she resolves to discover the secrets of them both.

Violet gives Caroline a skeleton key that will unlock all the doors in the house and Caroline uses this and discovers a secret room which she thinks holds the solution to the mystery surrounding the house and its previous occupants. Almost obsessively, Caroline searches for the truth, only to become embroiled in something even she cannot initially comprehend, leading to a final twist that resolves and answers all her questions.

Kate Hudson is fairly ordinary in her role as the assertive Caroline and at the very least she is consistent, but she doesn't seem remotely stretched here. Peter Sarsgaard is Luke, the family lawyer of the Deveraux's, and in a fairly small role manages to maintain an air of mystery and creepiness. But it is the roles of the Deveraux's that are the most appealing, especially that of Gena Rowlands as Violet. She manages to keep you guessing as to whether she is a goody or a baddy in a particularly mischievous manner. As a partially paralysed stroke sufferer, poor John Hurt doesn't really get to say much, so he has to rely on visually getting across his point and the evil that has been inflicted upon him.

A routine haunted house type movie, 'The Skeleton Key' is pretty much a mild and undemanding thriller flick that is scarce on thrills. There are a few moments of high tension, but there really aren't enough to elevate this into the high stakes, leaving it as more of a real popcorn movie - the type that you quickly forget the minute the credits appear. Still, it's worth a look, especially for Gena Rowlands performance and wondering just if and when John Hurt is actually going to say anything.