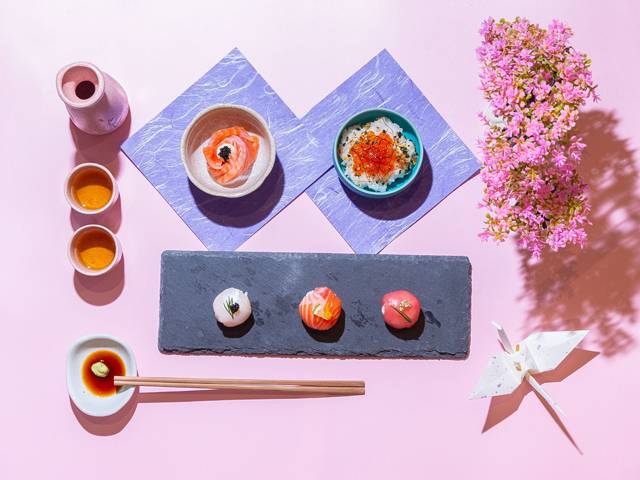 Sushi Boto, a concept brought to you by the team behind White Mojo, has now launched and sailing through calm waters on the top floor of the recently opened 'Street Eats' extension at St Collins Lane.

Sushi Boto's menu is derived from traditional sushi but also has tasty twists such as soy sauce spiked with Aussie Vegemite and tempura chilli cheese avocado – drawing on the provenance of Sushi Boto's café roots of White Mojo.

Pretty as a picture, the Sushi Boto stream winds its way merrily merrily through a landscape of pink flowers. Seating 55 people and with all the sushi boat plates at only $3.80 per dish, Sushi Boto makes 1000 sushi treats a day to satiate their patrons.

Sushi Boto prides itself on its dedication to serving up the freshest of fish, by using the technique of long-line fishing, as apposed to net fishing. Long-line fishing produces a far higher quality fish, as they're brought in one by one, compared to net fishing where the fish can be brought up onto the deck 20 tonnes at a time, compressing and damaging the fish. Once in the hands of the experienced Sushi Boto chefs, they begin the process of dry aging.

Dry aging increases glutamate, the key ingredient that produces the delectable umami flavour. Sushi Boto dry age fish for 21 days to ensure full and fresh flavour impact. As you would expect, Sushi Boto take their fish seriously, so seriously in fact that they have a 'Chef Special' menu that exults their dishes to a new level.

We introduce you to the 'Sushi Steps,' literally a gradient step plate much like a showgirl's stairway where every dish is a star. The dishes are organised from the subtlest and finish with a rich grand finale, a Japanese Foie Gras Don.

Sushi Boto offers the 'Tuna Rack'.
The Tuna rack is half a rack of dry aged tuna served with seaweed and sushi rice. This dish is offered with disposable gloves so patrons can turn their hand to preparing their own sushi at the table.

There is so much fun to be had at Sushi Boto. But wait, there is more!

At the rear of the restaurant is a line up of toy machines and mechanical claws that can be operated with a token. Lucky punters can win anything from mini ramen bowl key ring to a Chanel lipstick. Good times for the young and old alike.

Ben Luo, owner and founder of White Mojo and Sushi Boto, says that boats are a better fit for sushi, as fish are caught on boats (not trains!).

"We offer fresh fish from the boat to the plate!" exclaims Ben enthusiastically. But more than a gimmick, it is clear that Sushi Boto is a concept from an entrepreneurial team who love and are passionate about quality food and new ways of serving customers.