Synopsis: What happens when kindness meets selfishness? When local fame meets global notoriety? A nice cup of tea is kicked aside by a frappacappucino? Postman Pat comes face to face with the dark side of the fame dream when he enters a national TV talent show and the demons of money, status and a new shiny suit conspire to tear Pat away from the small hometown that loves him.

Postman Pat (Stephen Mangan), a humble and beloved postman, lives an idyllic life in the charming countryside village of Greendale with his wife Sara (Susan Duerden) and his young son Julian. When new SDS employee Edwin Carbunkle (Peter Woodward), obsessed with efficiency, hatches a plot to take over the Special Delivery Service (SDS), Pat's plans to take his wife on a -proper honeymoon' to Italy topple. Removing the kindly CEO (Jim Broadbent) and installing a workforce of robot postmen are at the heart of Carbunkle's evil scheme.

After viewing an episode of You're The One, a TV talent contest, Pat throws his hat in the ring and competes for the grand prize, which includes a recording contract and, as fate would have it, a trip to Italy. Pat is a sensation, singing beautifully (singing voiced by Ronan Keating) and emerging as a finalist to compete against young Josh (Rupert Grint) at the big finale in London. Along the way, Pat falls prey to the trappings of fame and fortune and becomes an unwitting pawn in Carbunkle's plot.

Josh's manager Wilf (David Tennant), myopically focused on securing the recording contract for his client at any cost, stumbles upon the robotic postal scheme and plans to use it against Pat, thereby snagging the win for Josh. Meanwhile, Pat's sudden thrust into the spotlight threatens to cost him the very things that he holds dearest: his family, his friends and his job.

It's another beautiful day in Greendale. Fluffy white clouds float in the sky above the Greendale Rocket as it chugs into the station and offloads its passengers. 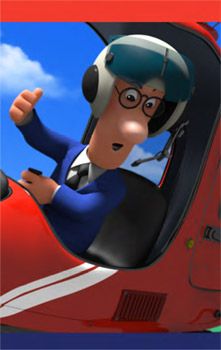 Postman Pat, a cup of tea in hand, steps onto the porch Forge Cottage. He kisses his wife Sara and sets off to start his day delivering the mail for Special Delivery Service (SDS). As always, his loyal companion Jess, the black & white cat, is along for the ride.

Before departing, Pat lets Sara in on a little secret. He has planned a trip to Italy for them to finally have a long promised -proper honeymoon.' As soon as he collects his bonus that afternoon, they'll book the travel and be on their way to the holiday of a lifetime.

Pat is not just a postman; he's a super helpful friend and neighbour to everyone in Greendale. On his way to the sorting office, Pat rescues a sheep from a tree, dispatches Jess down a chimney to deliver Major Forbes's hearing aid batteries, and promises to personally deliver Lizzy's letter to Father Christmas (even though it is mid summer).

Arriving at the sorting office a little later than usual, Pat finds the place in utter chaos. Envelopes and packages hurtle everywhere. Ben and the other postal employees run in circles to mitigate the craziness. SDS is amidst a freshly enabled automated nightmare.

It seems that SDS has engaged a new efficiency expert, by the name of Edwin Carbunkle, to oversee the implementation of an austerity program. Much to Pat's chagrin, this means no annual bonus and a highly mechanized and confusing infrastructure.

Disheartened, Pat returns home after a long workday. He finds Sara up to her neck in preparation of a huge Italian feast commemorating their upcoming trip to the land of La Dolce Vita.

Pat struggles to communicate his disappointing news to Sara: no bonus means no trip. Meanwhile, Julian, Pat's young son, turns on the TV to watch the latest episode of You're The One, a hit talent contest. Great news! The show will audition people in Greendale, and the winner will receive a recording contract and a trip to Italy. Desperate not to disappoint Sara, Pat decides to audition.

Come the night of the audition, the entire town has appeared in force to display their unique talents for the sour and cynical host Simon Cowbell. Overcoming his nerves, Pat takes to the stage to sing. And, astonishing everyone, he turns out to have a stunning voice! Pat wins a coveted slot in the London-based finals.

As events unfold, Pat's only real threat for the grand prize is boyband singer Josh, who is considerably less ambitious than his aggressive, but dimwitted, manager Wilf. In his down time, Josh pacifies himself with video games; Wilf plots a win for his protégé at any cost.

Yet, personally and professionally, things appear to be proceeding nicely for Pat, until Carbunkle interferes. Carbunkle reveals his brilliant idea to replace Postman Pat with a robot. At first, Pat is reluctant to comply. However, the well-meaning SDS CEO, Mr. Brown, unaware of Carbunkle's machinations, convinces Pat to represent the company in a rigorous public rehearsal process and personal appearance tour. Mr Brown promises that, after winning the contest, Pat will return to his old job in Greendale, business as usual.

With the prospect of winning that trip to Italy weighing heavily on his mind, Pat agrees. What possibly could go wrong?

Everything, that's what! Ultimately, Edwin Carbunkle is a bad man. He has no intention of allowing Pat's return to business as usual at the Greendale sorting office. Oh my goodness, no! Carbunkle, being a big picture thinker, has a much grander plan: to introduce a super efficient robot workforce to make the SDS the biggest and most successful delivery company in the world! First Greendale, next Britain, and then the world! And with the CEO being too gullible to see clearly, and with Pat absorbed in his budding stardom on the telly, nothing appears to stand in Carbunkle's way . . .

Nothing, that is, until Wilf inadvertently discovers that Pat just might be a robot. Everyone knows that robots cannot compete talent competitions. Determined to use this new knowledge against Pat, Wilf (all too unaware of Carbunkle's plans for world domination) decides to expose the Patbot onstage at the finals. Unbeknown to anyone however, Carbunkle's decided he's no longer in need of the real Pat and locks him in his dressing room and proceeds with his unsavory activity.

Upset by Pat's behaviour as he gets seduced by the fame-machine, Sara and Julian and the much- maligned citizens of Greendale (who also are victims of the inept robotic postmen) boycott the televised finals in London. Pat's neglect is even too much for his most loyal friend, Jess the cat. Jess avoids the last round of competition too. For the first time in his life, Pat is truly alone.

Back in Greendale, Ben (Pat's sorting office colleague), notices that there is more than one Pat racing around town in Pat's signature red van, tearing up lawns, and wreaking havoc on the population of Greendale. This is not the Pat whom Ben knows. First, there are way too many of them, and second, Pat is away in London at the big show Spurred by this discovery, Ben and Sara call a village meeting to share the news. The result is collective remorse: how could they have been so foolish as to distrust the dearest man in Greendale? They have let Pat down, and they must make it right. So they all head off to the big city to support their friend Pat.

At the finals, Carbunkle's Patbot takes to the stage to sing Happy, Happy Postman with his chorus of backup singers and dancers all decked out in full showbiz regalia. Meanwhile, the real Pat and Jess (who has surfaced and freed Pat from his dressing room prison) are being pursued across rooftops by an army of Postman Pat look-alike Patbots. With the audience wrapped up in the performance and oblivious to the threat of the Patbots, it seems nothing can stop Carbunkle now.

Nothing but Wilf! He sweeps onstage, giant magnet in hand, to prove that the singing Postman is indeed a fraud. The metallic robot breaks into a million little bits and bytes in front of everyone. With mission accomplished, Wilf is convinced that Josh will win the competition now. At that moment, Pat, having evaded the Patbots on the roof rushes onto the set and attempts to explain the whole sordid mess. Undeterred, Carbunkle unleashes an army of Patbots, who march through the crowd and onstage, intent on destroying everyone and everything in their path.

In the nick of time, video game guru Josh hacks into the robots' motherboards, and with one push of a button, immobilizes the whole battalion of Patbots.

Threat averted, Simon Cowbell awards Pat the grand prize of the recording contract and the trip to Italy. Pat hands over the prize to Josh. He's realised that winning, at the expense of losing everything you care about, isn't worth it! A delighted Josh hands back the travel tickets to Italy. Now they can BOTH be winners. Sara and Julian hug Pat, thrilled to have back their beloved father and husband.

Pat sings Signed Sealed Delivered to Sara as his family and friends, who have now arrived to show their support, join in the celebration.

Thanks to Pinnacle Films here is your chance to win one of 25 x Postman Pat Family (4) passes.

Shiver me timbers! Climb on board with Postman Pat and Jess the Cat as the set off on their most fantastic...

Together with his boss Ben, a fleet of new vehicles and his faithful companion Jess the cat, Postman Pat proves...

Jess the cat from the lovable TV series 'Postman Pat' now has his own show. Each episode is based upon one 'Big...

Thanks to Roadshow Entertainment here is your chance to win one of 8 copies of Postman Pat: Special Delivery... 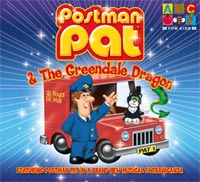 Postman Pat and the Greendale Dragon

Thanks to Roadshow Entertainment and the release of Postman Pat and the Greendale Dragon on CD his is your... 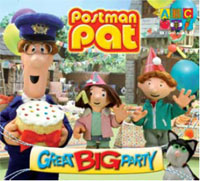 Postman Pat is a pre-school brand for boys and girls aged between two and five. Each episode follows the...