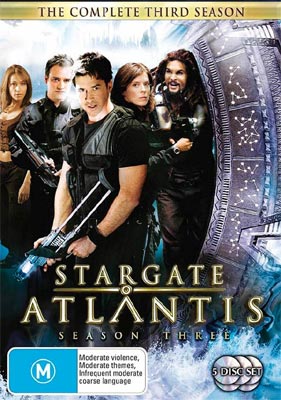 Things get complicated when an experiment gone awry drains their only ZPM, leaving them without a power source for the city's shields. Soon thereafter, they find a lost Ancient vessel and subsequently lose the city of Atlantis when the crew of the Ancient ship reclaims it. The SGC sends General O'Neill and Richard Woolsey to try and negotiate an agreement between Earth and the Ancients to allow the expedition back in Atlantis. O'Neill and Woolsey dial Earth and inform them that the Asurans (self-replicating nanobots) are taking over the city. They kill off the Ancient crew who reclaimed the city after 10,000 years.

The main members of the Atlantis expedition on Earth disobey the orders and go back to the city, rescue it, and destroy all the Asurans. The season finale starts off with Earth launching a first strike against the Asurans who are building an armada to attack Earth. The Asurans counterattack by attacking Atlantis by means of a powerful beam weapon fired through a satellite housing a Stargate. As the last resort, the Atlantis team fires up the city's stardrive and escapes into space. The finale ends when the hyperdrive malfunctions, leaving the city flying through uncharted space with a day's worth of energy left in their sole ZPM and Dr Weir critically injured.

Gifted pilot Lt. Colonel John Sheppard is the military leader of the premiere Stargate Atlantis team. A cunning soldier with a wry wit and wicked golf swing, Sheppard leads the team through both on-base and off-world missions. Season four puts Sheppards leadership and bravery to full use as the crew works to stay one step ahead of their longtime foe, the Wraith, and newly emerging enemies sure to test their stamina.

Dr. Rodney McKay, the brilliant and lovably sarcastic astrophysicist returns for season four of Stargate Atlantis. Arrogant, yet charming despite himself, McKay continues to find himself under the gun to solve the galaxys most challenging equations before the enemy catches up with them.

Teyla, the beautiful alien warrior, brings her calm, insightful leadership and formidable fighting skills to the Atlantis team. And with her rare ability to sense the Wraiths presence, she adds a further dimension to the fight against their prime enemy.

Now a trusted member of the Atlantis team, Ronon has a physical presence to be reckoned with. His kill first - ask questions later approach to interstellar negotiations brings an explosive and foreboding element to the team and their volatile off-world excursions.

Dr. Carson Beckett is the Atlantis team's chief medical doctor. The lovable Scottish physician has a witty sense of humor and his ability to activate Ancient technology frequently lands him in compromising situations. He is credited with discovering the Ancient Gene in humans.

The boyishly good-looking young officer once served as the Stargate Atlantis team's military second-in-command. He has since gone rogue, and utilizes a number of unethical and unorthodox strategies in his guerilla war against the Wraith.

Attractive, brilliant, but not one to seek the spotlight, Dr. Weir has worked behind the scenes in the U.S. government for several years. Though she's not the one who signs treaties, she has brokered a dozen of the most sensitive international accords in modern history. She has two Ph.D.s, teaches political science at Georgetown University, has served in embassies all over the world and speaks five languages. Though she began her career as a political activist lobbying against government spending on the military, she later decided the best way to stop weapons proliferation was to end the need for them. Placed in charge of Stargate Command by President Henry Hayes, she now commands the Stargate Atlantis team.

Jennifer Keller is the newest member of the Atlantis expedition, taking over the position of Chief of Medicine. Quietly confident, Dr. Keller must quickly learn how to fit in to the strange and exciting world of Atlantis, and has her medical skills and courage tested early on.

Col. Steven Caldwell is attached to Team Atlantis as the commander of the intergalactic battle cruiser Daedalus.

Brilliant and beautiful Air Force Colonel Samantha Carter has been reassigned from SG-1 to the city of Atlantis to oversee its operations in the Pegasus Galaxy. Her extraordinary abilities in astrophysics and Gate technology, and her years of combat experience as a member of the elite SG-1, provide the Atlantis team with unmatched military backup.