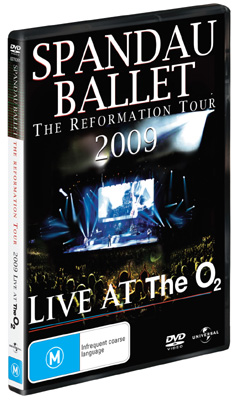 Spandau Ballet's first live DVD in over two decades will be released in Australia on March 31st timed to coincide with the group's Australian tour.

Filmed during their sell out concerts at London's O2 Arena in November 2009, Tony, John, Gary, Martin and Steve return with a vengeance in the Reformation Tour that brought over 100,000 fans to their feet.

Spandau Ballet Live at the O2, shows the London 5-piece doing what they do best, taking to the stage at the world's most popular venue, entertaining fans old and new for well over two hours, playing the greatest hits tour that they never did before they split up.

Gary Kemp comments: "I sat down a while ago to mix the old footage from a past concert, it struck me how good we were live. It was just the catalyst that we needed to get the band back together for this tour. After watching the footage from the shows at the O2... it's clear that we have only got better over the years! The gigs were truly one of the best times of our lives and the audiences were even more enthusiastic than they were back in the day. This film is a close as it gets to bottling that amazing night."

A 50-strong crew, led by the Godfather of music video production, Scott Millaney, used over 20 cameras to capture every angle and all the excitement of the critically acclaimed concert production. Award-winning music video specialist, Nick Morris directed the documentary.

From classic hits including Gold, True, Through The Barricades, To Cut A Long Story Short and Chant No 1, to Once More and With The Pride from their new album, Spandau Ballet Live at The O2 proves that it was absolutely worth the wait. This is a must own for fans of the band and fans of music in general!