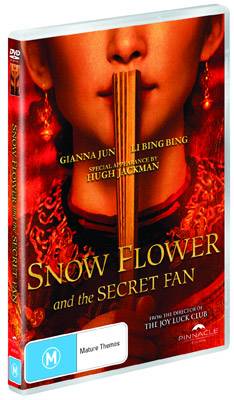 Inspired by the bestselling novel Snow Flower and the Secret Fan by Lisa See, the film tells the story of seven-year-old girls Snow Flower and Lily, in 19th century China, who had their feet bound at the same age and on the same day, which sealed their fates together as laotongs - bound together for eternity. Isolated in their marriages, they furtively communicate by taking turns writing in a secret language, nu shu, between the folds of a white silk fan.

In a parallel story in present day Shanghai, the laotong's descendants, Nina and Sophia, struggle to maintain the intimacy of their own childhood friendship in the face of demanding careers, complicated love lives, and a relentlessly evolving Shanghai. Drawing on the lessons of the past, the two modern women must understand the story of their ancestral connection, hidden from them in the folds of the antique white silk fan, or risk losing one another forever.

What unfolds are two stories, generations apart, but everlasting in their universal notion of love, hope and friendship.