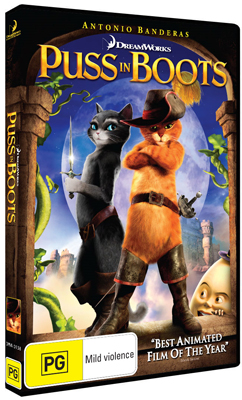 You loved him in Shrek…now see where the one-and-only swashbuckling feline found his fame - and a very big pair of boots - in the "hilariously funny" animated epic! Lover, fighter and outlaw Puss In Boots (Antonio Banderas) is off on the adventure of his nine lives as he teams up with Kitty Softpaws (Salma Hayek) and Humpty Dumpty (Zach Galifianakis) for the ultimate showdown with the notorious Jack and Jill (Billy Bob Thornton and Amy Sedaris). Here's the true story of The Cat, The Myth, The Legend - Puss In Boots!

As the dust from his latest adventure begins to settle, Puss In Boots finds himself at a crossroads between two destinies - hero and outlaw. When a desperate princess hires Puss to recover her stolen ruby, he is reluctantly partnered with three little kittens. Adorable. Fuzzy. Deadly. The minute the mittens are off, The Three Diablos wreak havoc on Puss' mission to recover the stolen ruby from the notorious French thief, "Le Chuchoteur The Whisperer." Can Puss tame these three little devils in time?