Question: Do you approach animation the same way as a live action role?

Question:  What sort of director is David Soren? Did he give you loads of direction, is he very hands-on?

Samuel L Jackson:   I don't know what you mean by hands-on! I get a phone call, almost like Mission Impossible, 'meet me at the studio on so and so date". You kind of show up and do some lines and every now and then someone will go 'oh, do it another way, do it this way, or that way" because they want to try things when they're in the animation process. Then they'll animate it and then they say 'Do it again but do it the way you did it before because we like that way'. And you just do it. The enthusiasm that everyone outside of the room shows you when you're in the booth is great and encouraging. Most like the way things work in this film, someone's outside saying 'Do this, do that and make it exciting, it's dangerous and it's so and so" .. and you add your voice to that and they say 'Yes! That's the way it is" or you see everybody out there laughing and you know you did something right.


Question: Did you get to do a certain amount of ad-libbing?

Samuel L Jackson:   A standard amount of it just because most of its reaction stuff and it's difficult to write those reactions or they'll tell you what's going on and you make up that thing that's going to make that work.


Question: Are you ever in the room with anyone else?

Samuel L Jackson:   Never, I never saw anybody. But it's ok for me, I'm an only child so I'm used to playing by myself!


Question: So you get the reactions from the people outside of the booth.

Samuel L Jackson:   Yes, it's like being a little kid, you look at the adults and think -Did I make them happy?'


Question: If you were given Turbo power to get to one friend or relative, right now. Who would you pick?


Question:  Are you a fan of Snoop Dogg, or Snoop Lion as he's now known?

Samuel L Jackson:   Am I a fan? I've known Snoop a long time. I've known him through all his transitional names!


Question: So what do you call him?

Samuel L Jackson:   I call him Cuz most times when I see him and he calls me nephew.


Question: Are you a fan of snails?

Samuel L Jackson:   Not particularly. I'm a golfer and at a certain point in the year they're everywhere. And I feel so bad for them because we can't help but run over them in golf carts, smashing them! Then I feel bad. Then there's this point in our house where they're all over the walls and it seems like we have the sort of plants they like the best. So they're kind of everywhere underfoot. 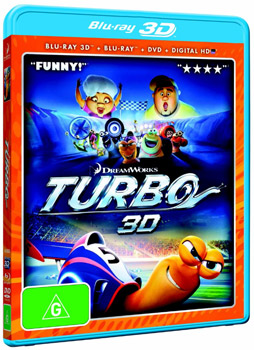 Laugh it up with the visually stunning, heartfelt comedy-adventure for fans of all ages this holiday season! 'Fresh, fast and funny" (Lou Lumenick, New York Post) and garnering four stars from Shawn Edwards with Fox TV, DreamWorks Animation's Turbo has been hailed by critics as 'pure family fun" (Jeff Craig, Sixty Second Preview) receiving outstanding audience reaction and a coveted 'A" CinemaScore.

DVD Special Features:
Champions Corner - Host Paul Page interviews Turbo one-on-one to hear all about his racing techniques and inspirations!
Be An Artist! – Dave Burgess, Head of Character Animation on the film, shows the audience how to draw: Garden Turbo and Racing Turbo.
Team Turbo: Tricked Out – See Turbo and all the rest of the snail crew in a break- down of the cool components that make up each of their shells.
World of DreamWorks Animation
Previews

Blu-ray Special Features:
Smoove Move's Music Maker – Watch action-packed music videos featuring songs from the Film.
Meet Tito – Director David Soren provides an introduction for a scene that was deleted from the film.
The Race – Director David Soren provides an introduction for a storyboard sequence that eventually made it into the film. Viewers can even see picture-in-picture comparison to the final cut.
Shell Creator - Create your own shell from select-able parts.
Champions Corner - Host Paul Page interviews Turbo one-on-one to hear all about his racing techniques and inspirations!
Be An Artist! – Dave Burgess, Head of Character Animation on the film, shows the audience how to draw: Turbo, Whiplash, Skidmark, Burn, Smooth Move, White Shadow, Chet and customisable Racers.
Team Turbo: Tricked Out – See Turbo and all the rest of the snail crew in a break- down of the cool components that make up each of their shells.
TURBO F.A.S.T Trailer from TV show – First look at upcoming new TV show this December
Holiday Favorites – Sneak Peeks
World of DreamWorks Animation – Music videos from your favorite DreamWorks Animation feature films.

Thanks to 20th Century Fox Home Entertainment here is your chance to win one of 5 x Turbo DVDs.