Child sexual abuse is commonly associated with an adult abusing a child, yet, a staggering one in four (24%) cases actually involve one child abusing another. Sadly, this type of abuse is increasing.

New research commissioned by Act for Kids reveals that while three quarters (78%) of Australians blame problematic sexual behaviours on access to online content, worryingly, parents are not taking the necessary precautions to protect their children online.

Program Manager at Act for Kids, Miranda Bain said the findings are both surprising and scary, "There is a lack of knowledge amongst parents of what constitutes problematic sexual behaviours in children and how these behaviours have the potential to lead to more harmful peer on peer abuse.

"While there are a number of places children might learn problematic behaviours, easy access to age-inappropriate content is a major factor in influencing these young minds." says Miranda.

The research finds that two-thirds (63%) of parents fail to secure their devices with passwords and one in two (55%) allow their children unsupervised access online.

As technology is evolving at such a fast pace, those responsible for protecting children are struggling to keep up. As a result, the 98% of children under 10 who already use devices, are left exposed to pornographic and violent content.

Concerningly, two-thirds (67%) of parents to children under 12 feel they need more education on how to protect their kids from accessing inappropriate content.

National Abuse Lawyer, Lisa Flynn, has extensive experience assisting those who have been sexually abused.

"Once a person has been sexually abused the emotional scars left can be debilitating. As a community we need to be doing everything we can to stop this alarming increase in the incidence of peer on peer abuse.

"We need to know how to identify where the risk exists, how to respond to it when it happens and how best to support all children involved to minimise the long-term effects of the abuse," says Lisa.

Miranda says, "It's important for parents to remember children show their needs and wants through their behaviour. So, understanding the reason behind their child's sexual behaviour is important.

"When children do not have the language, experience or ability to seek help, adults must look carefully at the behaviour to interpret it. Unfortunately, while there isn't a one size fits all solution, reviewing the behaviour will help parents understand what is going on," says Miranda.

This Child Protection Week (1-7 September), Act for Kids is urging parents to take the necessary steps to protect their children online and learn more about the warning signs of problematic sexual behaviours.

The research was conducted by PureProfile on a representative sample of 2002 Australians 18 years and older. The survey was conducted on behalf of Act for Kids in July 2019. 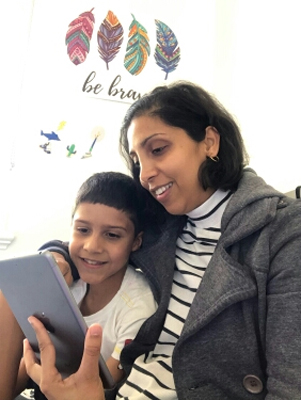 Question: Where you surprised to hear that a quarter of all abuse cases involve another child?

Sabine: Being familiar with the legal system, I have heard similar statistics raised in the past whenever a particularly unsavoury case comes before the courts, however people seldom acknowledge a statistic until they become one.


Question: Can you tell us about online issues you've had with your seven-year-old son?

Sabine: Raising children who are "technology natives" is difficult without the added complexity of having to support their development with constant vigilance and increased scrutiny. These days I almost need a device to monitor the device my child is using. I was astounded to discover the level of resourcefulness my son has in accessing online content, downloading apps, making in-app purchases, typing in search fields, and having the know-how to navigate and change device settings. I discovered his ingenuity by way of an app store bill in the tune of $350. I was also unsettled over downloads of a shooting game, the kinds of games I had not banked on my son discovering until he was at least in his teens.


Question: How have you secured your child's devices?

Sabine: Following the apple account bill, I have restricted in-app purchases, restricted app downloads, and applied age restrictions to the phone so that my son will only be able to access content that is G rated.


Question: Where do you find education for protecting your child, online?

Sabine: Act for Kids is a good resource for protecting kids and on matters that affect children.


Question: How have you learnt to discuss these issues, with your seven-year-old son?

Sabine: Investing sometime in early education and an open, transparent discussion on the ability to identify inappropriate content and deal effectively with the situation to eliminate the content or alert an adult.


Question: What message would you like to spread to parents during Child Protection Week?

Sabine: This child protection week, I'd like to urge parents to do what they can to protect their kids online. I think it's vital that, as parents, we model appropriate behaviour and communicate the importance of online safety to help keep kids safe. It's time we start a conversation about the material our kids might be accessing, or that someone else might be showing them. Parents can learn how to protect their kids online by visiting www.actforkids.com.au.

Photo by Jelleke Vanooteghem on Unsplash