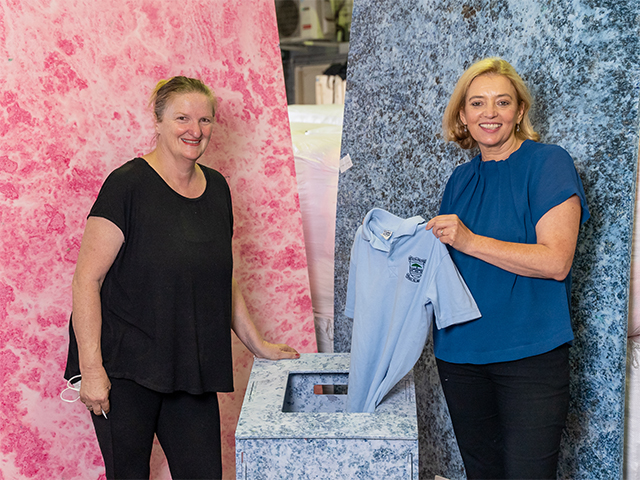 At the start of a new school year how many uniforms in your household no longer have a use because they are worn out, don't fit or their former owner is graduating?

Sydney-based Worn Up Textile Rescue Program is giving a second life to old uniforms with the support of the NSW Environment Protection Authority (EPA).

Worn Up's pioneering textile recycling program aims to keep 100 tonnes of used uniforms and textiles out of landfill nationally by transforming the unwanted clothing into new, useful items including a global first composite called FABtec for furniture and other applications such as school desks, stools and acoustic tiles.

The recycling initiative recently received a $100,000 grant from the EPA's Circulate program to fund its program and increase outreach to rural schools and big businesses.

EPA Organics Manager Amanda Kane said programs like Worn Up are critical with more than 300,000 tonnes of textiles discarded in NSW each year and almost 240,000 tonnes are being dumped in landfill annually.

"Worn Up are helping divert reusable textiles from landfill, while creating jobs in the circular economy, and reducing emissions," Ms Kane said.

"Polyester and organic textiles are wasted in landfill and create greenhouse gas emissions. And on average, each Australian discards at least 23 kilograms of textiles a year.

"Research shows just 28% of textiles are being recycled and re-used which is not sustainable, and it's definitely not in fashion."

Research commissioned by the EPA found that every time NSW households put their red bin out for collection, they send almost half a kilo of textiles to landfill.

Worn Up founder Anne Thompson said each school discards between 100-200 kilograms of non-wearable uniforms each year.

"We now have seven Sydney metropolitan councils on board, one regional council and 66 schools taking part in the council program. Businesses joining the Program include Toby's Estate, Suntory Coffee, Lowes, IKEA, Glassons and many others nationally.

"If the more than 3,000 schools in NSW joined the program, we could divert more than 310 tonnes out of landfill each year, just from school uniforms. The $100,000 grant from the NSW Government's Circulate program is a great help – it will support us to increase outreach to rural schools and businesses."

Ms Thompson said starting a new school year or undertaking a uniform change is the perfect time to think about recycling uniforms that could not be re-used.

Saving textiles from landfill is an important part of the NSW Government's goal of creating a circular economy and reaching net zero emissions from organics by 2030.

"Everyone in NSW has a responsibility to waste less and recycle more," Ms Kane said. "Initiatives like Worn Up are a great example of thinking outside the box to divert unloved, unwanted clothing from being dumped into landfill, and reborn as new items that can be used and valued."

To find out more about the NSW EPA's Circulate grants, visit: www.epa.nsw.gov.au/working-together/grants/business-recycling/circulate-grant.