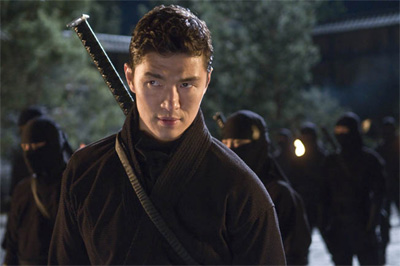 YUNE IS ONE NINJA ASSASSIN.

Rick Yume is fast becoming a rising star in American film and with his chiseled physique and handsome features, he seemed a natural for working in front of the camera, but his original intention was to pursue a career on Wall Street.

Born in Korea and raised in the Washington, DC, area, he was enrolled at Wharton when a modeling agent "discovered" him in the elevator of the financial firm at which he had a summer position. Impressed with Rick Yune's charisma and natural good looks, the agent managed to land the novice model some impressive gigs. Rick Yune became the first Asian-American to appear in campaigns for Versace and Ralph Lauren's Polo. One might have thought that acting would be the inevitable step, but instead the model accepted a position as a stock trader when he graduated in 1994.

Work on the Street, however, became somewhat stifling for Rick Yune, who began to take acting classes as a creative outlet. Leaving his job in finance in 1997, he soon landed his first paying job: a guest role as a district attorney on the NBC daytime drama "Another World". Two years later, he landed the coveted role of Kazuo Miyamoto, a Japanese-American war hero who is accused of murder in the 1950s Pacific Northwest in "Snow Falling on Cedars" (1999).. He then starred as the leader of a Vietnamese gang in "The Fast and the Furious" (2001) before tackling another villainous character in "Die Another Day" (2002), the 20th James Bond feature. As Zao, a North Korean military man trying to transform his appearance into a white Westerner, Rick Yune was a freakish sight with bleached-out skin, blue eyes and a face scarred and studded with real diamonds.

Rick Yune now co-stars opposite Rain as the principal antagonist in the actioner Ninja Assassin, and talked to Paul Fischer in this exclusive interview.

QUESTION: What intrigued you about the idea of playing this fairly mysterious antagonist in this movie?


QUESTION: What are the challenges for you to play a character like this because he can be very black and white? Was it important for you to try and put a bit of gray into him?

RICK YUNE: Yeah. I can't think that I would try to judge a character. I just try to look at the motivations, and accept all of them. So I don't know any ninjas, so there's no way for me to get a sense of what one would stay true to anything. I've been a huge ninja fan since I was a kid and I've seen some of the characteristics - and hopefully, I've added a little more depth to them. But underneath all of that, you're only as good as the people you're surrounded by, and how the story's put together. And - you know, we have a great director, James McTeigue, who paid attention to every single detail in what was happening. I remember - you know, it was all set. And in the last scene, it's pretty much a throwaway scene, I that. You run over to fix somebody's ninja mask. So, you know, it's those things that you rely on to help your character out. And - you know, listening to him. And also - you know, for the movement, it was the set coordinators who did the stunts for The 300. Working for a producer like Joel Silver, and then, you know, being with the Wachowski Brothers, who created The Matrix. I mean, these aspects are the things that make Ninja Assassin what they are.


QUESTION: Now there are a lot of times when part of your face is masked, so a lot of acting has to be done through the eyes. Is it a challenge for you to do that? And how did you work on that?

RICK YUNE: They made it very real. When you're wearing that costume, and then you're seeing the other action around you - it's just being in that moment that allows, something to come alive. And you're right, I'm under a ninja that's masked up and what I focused on is allowing everybody else's work to flow through me. And when you're working with the best, it allows you to trust, and to kind of go for the ride. That's when I think the best performances come out.


QUESTION: What kind of training does one do for such an ethereal and kind of - almost fantasy figure like this?

RICK YUNE: Well, the training was done by the 87 Eleven stunt team and hats off to them, because these guys are pretty amazing. They did the stunts for The 300, which is completely different than Ninja Assassin, but the physical training was very similar, if not harder. I first started training with them in January of '08, before I knew of this movie and basically, when I went down to the center, I had a little bit of me going, "How hard can it be?" But I quickly called it The Church, because in the first five or ten minutes, when you're doing - you're calling out to God. So, you know, these guys are able to then utilize all that training to make it look good on screen. When you're working with people that understand how actions should appeal to an audience it's going for the ride and just allowing other people's work to flow through. 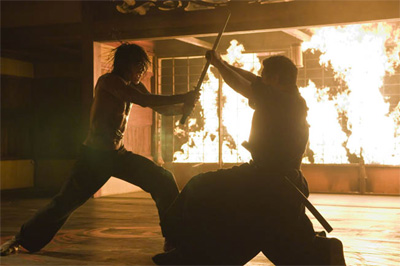 QUESTION: Now, you know, you've had a really quite fascinating life. Before you became an actor, you were a Wall Street hedge fund trader. I mean, where does the transition from the white - from that white collar world to your interest in acting come from? Why that transition?

RICK YUNE: I've always been attracted to risk, because I think when you take a risk in life, and you're looking at beyond the limitations, it helps you grow. And the fact is, is I think I'm taking the greatest risk that I could ever take in life now, being an actor, and being in film. I did my own film, called The Fifth Commandment. I wrote and I produced and financed it. But - you know, from that, I learned how important everybody is in the whole filmmaking process. And it's about growth, for me. So, you know, when I look back, I can't even begin to tell you all the circumstances that came into play, to allow me to be in the position that I'm in. I can only say that I've been extremely lucky.


QUESTION: In fact, let's look at this. I mean, you were a model. You did a number of Bruce Weber campaigns. You qualified for the Olympic trials in Tae Kwan Do. You graduated from a business school in Philadelphia. It's really quite an extraordinarily mixed life. How much of an earlier aspect of your professional life do you use today? For example, as a business school graduate, has that come in handy in your involvement and your dealings with the film community?

RICK YUNE: You know, it was completely abstract for me, when I first got into the business. My first film I was working with Oscar-nominated individuals. I mean, Max Von Sydow and the producers were Kennedy/Marshal and we had an amazing director from Australia, Scott Hicks, who had just come off of Shine. But for me, taking that Wall Street approach was - it was not sort of the best approach to it and I quickly learned it's about trust. The one thing that working in that environment did give me was the understanding of what it took to put yourself on the line. I had no perspective on the whole filmmaking process, but I did have a perspective on being able to take a risk, and looking at a situation, and knowing that you can only get to a certain place by being committed and putting your whole 120 percent behind whatever you're trying to do. It wasn't until after the Fifth Commandment, which again -


QUESTION: Which you wrote and produced.

RICK YUNE: Yeah. And then also financed, and did the post-production and distributed. It - Wall Street helped on that, because although we are making movies, and what we see as artistic, there is a business aspect to it that's very important. 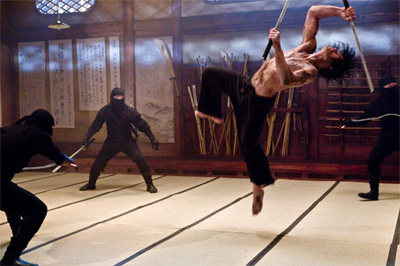 QUESTION: You - being an Asian-American, are you constantly being challenged by the opportunity to play roles that are not ethnically specific? I mean, is that something that you're trying to venture into? Or is that a constant battle in Hollywood, even today?

RICK YUNE: Well, I can tell you this. If I was white or black or Hispanic or Australian in Asia, would I be in the position that I am today? I would say, no. Point blank. Hollywood is - you know, probably the only place in the world where we have so many international people, being able to be a part of this amazing art form. And - there are challenges in any business. There's going to be challenges in Hollywood, but I think that I have more opportunity here than anywhere else in the world.


QUESTION: Do you know what's next for you at this point, Rick?

RICK YUNE: You know, I have an amazing situation happening now. I can't announce it until the new year, out of respect to the other people involved, but it's another highly respected filmmaker, but also somebody respected outside of the business, also.


QUESTION: Will this be a major studio movie?

Raizo is one of the deadliest assassins in the world. Taken from the streets as a child, he was transformed into a trained killer by the Ozunu Clan, a secret society whose very existence is considered a myth. But haunted by the merciless execution of his friend by the Clan, Raizo breaks free from them... and vanishes. Now he waits, preparing to exact his revenge.

In Berlin, Europol agent Mika Coretti has stumbled upon a money trail linking several political murders to an underground network of untraceable assassins from the Far East. Defying the orders of her superior, Ryan Maslow, Mika digs into top secret agency files to learn the truth behind the murders. Her investigation makes her a target, and the Ozunu Clan sends a team of killers, led by the lethal Takeshi, to silence her forever. Raizo saves Mika from her attackers, but he knows that the Clan will not rest until they are both eliminated. Now, entangled in a deadly game of cat and mouse through the streets of Europe, Raizo and Mika must trust one another if they hope to survive... and finally bring down the elusive Ozunu Clan.