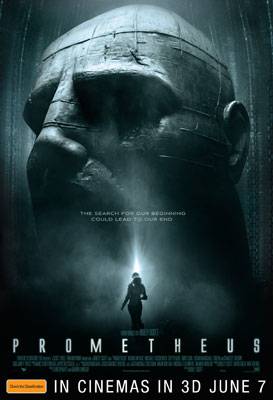 Synopsis: Ridley Scott, director of 'Alien' and 'Blade Runner,' returns to the genre he helped define. With Prometheus, he creates a groundbreaking mythology, in which a team of explorers discover a clue to the origins of mankind on Earth, leading them on a thrilling journey to the darkest corners of the universe. There, they must fight a terrifying battle to save the future of the human race.

Verdict: Prometheus starts off with some amazing graphics which show an Alien and a UFO in a fairly dark first scene. We are then treated to sights of ruins found with symbolic carvings on a cave wall which showcases an explanation of 'them' wanting to be found. The film moves along quickly to the spaceship Prometheus flying through space.