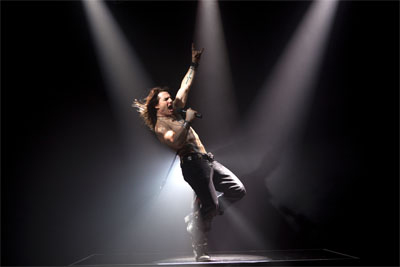 Verdict: Unfortunately I wasn't lucky enough to see the stage show of Rock Of Ages when it was performed in Australia; which is why I have been hanging out to see the film-inspired Rock Of Ages!

Containing all the sing-along-songs of the 80's, Rock of Ages is an all-round film winner and is guaranteed to have audiences singing along, dancing in their seats (I definitely was) and reminiscing of the times when they first danced to the hits of Def Leppard, Joan Jett, Foreigner, Bon Jovi, Pat Benatar, Twisted Sister, Poison, Whitesnake, and many more!

I thoroughly enjoyed hearing Pour Some Sugar On Me, again, and all of the melodies mixed throughout the film. It's almost worth seeing this film just for the hilariously funny Russell Brand and Alec Baldwin duet! Even more enjoyable was the enthusiastic cast - they seem to be having a blast making the film.

Tom Cruise as Stacee Jaxx is a surprising standout stealing many of the scenes with his crazy-rock-and-roll (think Axl Rose of Guns N' Roses) attitude whilst Julianne Hough (of the 2011 Footloose remake) cements her onstage persona of a gorgeous all-round actor, singer and dancer! Diego Boneta plays Sherrie's (Julianne Hough) love interest, Drew, who is one of many rock-star wannabes, best part? Drew can actually sing and he does, a lot, in this film. Whilst Catherine Zeta-Jones and Mary J. Blige (that hair is phenomenal) make this film really, really stick!

Rock of Ages focuses entirely on the music of the 1980's and takes audiences on a lively and loud journey of love through rock and roll music.

Rock of Ages is a film that is NOT to be missed (I now regret not going to the stage show, 100 times over). I also fully recommend getting a copy of the soundtrack; I bought a copy from iTunes and it's been on repeat on my iPod! Grab your mum and your girlfriends and run to the nearest cinema for a guaranteed two hours of fun!
Rating: *****
-Brooke Hunter