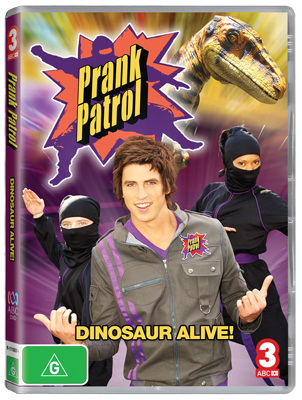 Follow Scotty and the Ninjas as they make a former prankster believe there's a Dinosaur Alive; a game of bowling turns into a disaster in Bowling Madness, while a self destructing bike is enough to turn anyone into a Motorpsycho. Plus, one prankee gets a visit from a Ghost, and some schoolmates believe they've caused a worldwide Internet Crash.

See if the Pranksters can pull it all off in these five side-splitting episodes!

While April Fools may have past, school holidays provide the perfect time to tune and practise your pranks, for plenty of action grab Prank Patrol Dinosaur Alive.