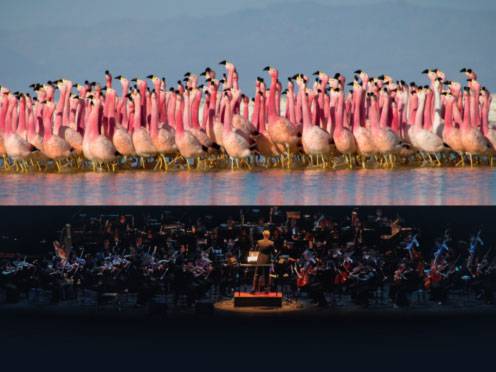 Now Planet Earth II Live in Concert will take the audience on a journey to the most spectacular landscape, cities and habitats on Earth and bring them eye-to-eye with the animals that live there. From rubbing shoulders with our acrobatic primate cousins in the steaming jungles of Madagascar, racing alongside fearsome hunting lions in the remote sandy deserts of Namibia, facing stormy Antarctic seas with a family of penguins and feeling the raw tension as a baby iguana tries to escape the clutches of deadly racer snakes to witnessing dancing grizzly bears and the bravery of a mother snow leopard.

Zimmer is renowned for his work on the likes of Gladiator, Interstellar and Blade Runner 2049, but said that the landmark BBC series stood out amongst his work. "Planet Earth II is one of the most amazing things I've ever been involved in: some of the greatest action scenes ever put on film, some of the most emotional, epic, fragile scenes I've ever witnessed. Filmmaking at its absolute peak."

Mike Gunton, Executive Producer, Planet Earth II said: "This is an evocative, emotional musical and visual experience that shows the wonder of nature on an unprecedented scale. The team and I have been absolutely enthralled by the wonderful music score that Hans, Jacob and Jasha have written for us - it feels so contemporary, cinematic and sensitive and provides the final, essential ingredient of Planet Earth II - one that superbly evokes not only the power and drama of nature but the humour and charm of our planet's animals."

Chantal Bindley, Head of Live Entertainment, BBC Worldwide ANZ, said: "We're thrilled to be giving Australian audiences the chance to experience Planet Earth II Live in Concert. The awe-inspiring footage provides a compelling insight into our natural world, and the incredible score by Hans, Jacob and Jasha adds its own special emotional charge. Fans are in for a fantastic treat."

Geoff Jones, CEO of TEG, parent company of TEG Live said: "Planet Earth II Live in Concert is a remarkable entertainment concept in itself, unique and innovative in so many ways, and exactly the kind of ground-breaking event that TEG specialises in promoting. The production takes on a global stature with the famous collaboration of Sir David Attenborough's natural history knowledge and the musical style of Oscar winners Zimmer, together with Shea & Klebe who made Planet Earth II such a success. TEG is absolutely thrilled to present this masterpiece to Australian audiences."

Review: If I had to describe Planet Earth II Live in Concert in one word, it would be spectacular.

The live narration from Eric Bana informatively and at times, humorously accompanied the structured pieces of Planet Earth II which left captivated audience breathless with delight.

The intense footage shown on the huge screen was remarkably complemented by the live orchestral accompaniment from Melbourne Pops Orchestra and conductor, Vanessa Scammell. The beautiful score by Oscar winner Hans Zimmer, Jacob Shea and Jasha Klebe for Bleeding Fingers Music produces an impact of emotions including fear, disbelief, unease and true excitement.

The Planet Earth II footage is unbelievable – you're truly unable to comprehensively understand how the footage was captured… until the end where audiences are shown how the camera-team was able to capture some of the beautiful content featured.

It's a pity there is only single performances in Sydney, Melbourne, Brisbane and Perth as I honestly believe everyone would be captivated by the image, sound and narration of Planet Earth II Live in Concert.
-Brooke Hunter

Tickets for Planet Earth II Live in Concert are available from Ticketek.