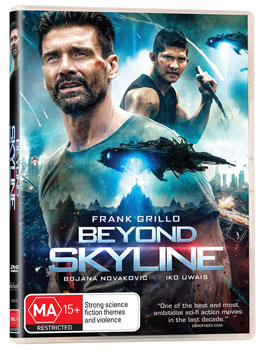 It's a sequel and a re-boot at the same time!

Get ready for sci-fi thrills beyond imagination as Defiant Screen Entertainment present Beyond Skyline.

When the population of Los Angeles is vacuumed off the face of the earth, a tough-as-nails detective embarks on a relentless pursuit to free his son from a nightmarish alien warship. Crash landing the ship in Southeast Asia, he must forge an alliance with a band of survivors to discover the key to saving his son and taking back the planet once and for all. Action stars Frank Grillo (Captain America: The Winter Soldier) and Iko Uwais (The Raid 1 and 2) team up for this long-awaited follow up to the world-wide smash hit Skyline.

The film's Director, Liam O'Donnell, states his goal for Beyond Skyline was to make a character-driven action film that is both a sequel and a completely stand-alone adventure. 'It's been my incredible privilege to build upon the foundation created with the original film, expanding upon the nightmarish ship and its otherworldly creatures. But from the beginning, I wanted to change gears with lots of action set pieces and hard-hitting in-camera effects and stunt work. I was overjoyed to be able to collaborate with the immensely talented actors and choreographers, Iko Uwais and Yayan Ruhian. Adding their unique brand of martial arts into the alien action brought everything up to another level."

The spark of inspiration for the first film Skyline, was real estate. Greg Strause, director of Skyline and producer of Beyond Skyline, had just moved into a new condo at Marina del Rey, overlooking the city of LA. 'Looking out the window, we had this idea that this would be an amazing location to watch the world end," said writer/director Liam O'Donnell who co-wrote the screenplay for Skyline before writing Beyond Skyline solo as his directorial debut. The original horror/thriller grew out from that original thought, blending in big imagery of an alien invasion and the mass abduction of the planet with our characters' story contained on the periphery of all that.

For the sequel, they wanted to open up the story and travel around the globe, combatting aliens in city streets, subway tunnels and jungles – anything but stay inside a condo which was the setting for the first movie. It was O'Donnell who wanted to develop a little muscle around the storyline and he did that by injecting a lot more action.

'The first movie had a cliff-hanger ending, but there was always interest in spending more time on the mothership itself. It also made sense to introduce a new group of heroes," comments O'Donnell. To do this, O'Donnell employed a unique approach for a sequel. 'We start the second movie on the same night as the first movie, the night of the invasion. The story moves in a completely different direction, but also answers questions from the end of the first movie, paying everything off." O'Donnell did this for the fans of the first movie because he didn't want to leave them stranded, while making Beyond Skyline a stand-alone film for anyone coming across it for the first time.

O'Donnell added, 'Beyond Skyline is a genre-bending science fiction/martial arts/throwback action film that's really unlike anything else out there. It was made for fans, by fans and we can't wait to share it with the world."