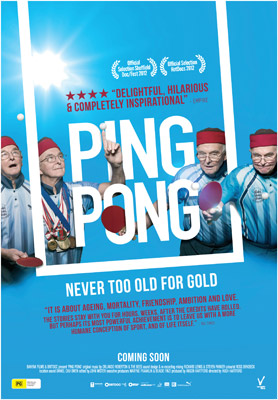 Synopsis: A delightfully inspirational documentary, Ping Pong is the story of eight pensioners from four continents who meet in Mongolia to compete in the World Over 80s Table Tennis Championships.

Starring Australia's own world champion and the world's oldest competitive table tennis player, Dorothy DeLow, Ping Pong proves the adage that you are only as old as you feel and celebrates the tenacity of the human spirit.

From retirement and care homes to mental and physical health; eight players with 703 years between them guide us through the extraordinary world of veteran sports. The film interweaves the competition with intimate and candid portraits that explore the hope, passion, prejudice, and immediacy of growing old.

Terry (81) having been given a week to live, gets in sight of winning gold. Inge (89) has used table tennis to train her way out of the dementia ward she committed herself to. Dorothy (100) finds herself a mega celebrity in this rarefied world and Texan Lisa Modlich, a new-comer at 85 years old, is determined to do whatever it takes to win her first gold.