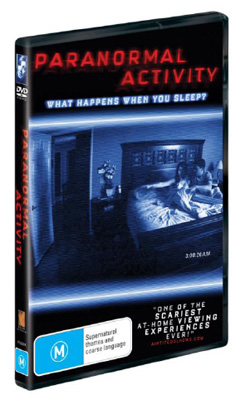 A young, middle class couple (Katie Featherston and Micah Sloat) move into their suburban 'starter' tract house. They become increasingly disturbed by a presence that may or may not be demonic and is most active in the middle of the night- especially when they sleep. Or try to.

As the weeks progress, the unexplainable presence becomes more malevolent…

Verdict: Let me start by saying if you scare easy this film is NOT for you! If you couldn't camp or go to an area that looked remotely like a forest after watching The Blair Witch Project then Paranormal Activity isn't for you.

My first recommendation is to not watch the film alone!

The serious fright flick is shockingly creepy, even though the storyline is quite cliché, the film is genuinely scary. The beginning is slow because you know what is to come; but the creepy atmosphere holds your attention, or fear, the whole way through. The film fills audiences with anxiety and fear and will ensure that any loud noises, lights flickering and doors slamming you hear in your house will have you thinking of this supernatural horror.

Paranormal Activity is filmed from the couples tripod and hand-held camera which made me slightly nauseous; however that could have been the suspense and the fact the film exploits all of my basic fears of things that go bump in the night. The film slightly explores the relationship between a new couple, whose real names are used and, who have just moved in together.

Good luck sleeping that night, if you actually watch through to the end of the film!