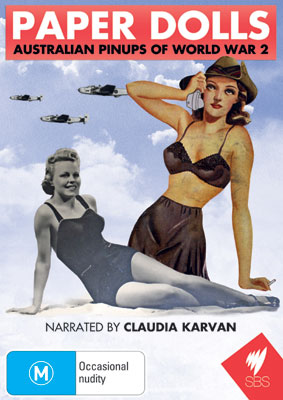 The joyous pinups who opened a window to the hopes and dreams of a nation at war.

Australia during the Second World War is usually pictured as austere, a time of rations and perseverance. Women from this time are often portrayed as domesticated or working for the war effort. Sexuality was dangerous and mentioned only in reference to the allure of the visiting American soldiers. Fashion was negated for the khaki greens and grays of uniforms.

In the dark of war, the pinup girls were pictures of hope, of a better time, of people's longing for fun. Pinups came in different forms: girls in bathers, dancing girls, drawings of glamorous, idealised womanhood and soft focus girls gazing longingly out of their frame. For the women featured in the photos, their brief stardom was for some exciting, an adventure and liberating, while for others it was a secret to be hidden from family and community.

Some women were photographed by professional photographers. Many women were photographed by friends or family members. These social photos were often sent into the paper or magazines and became collectable items for men in the military. Some of the women were voted as Number 1 pinup girl and mascots for Army battalions, Air Force squadrons and Navy ships, their pictures adorning lockers, tent walls, mess halls and notice boards. Many received hundreds of letters from servicemen stationed in far-flung places abroad admiring 'their' girls and telling of their loneliness, fear and desire to return home.

This film charts the growth of the Australian pinup through the recollections of three former pinup girls (one amateur and two professional models) as well as a selection of World War 2 veterans who share how these pictures were morale boosters and uplifted their spirits during a frightening, desperate and lonely period of their lives.

As the war progressed, these pin-up images and the women who posed for them were co-opted into the war effort. The line blurred between pretty pictures and propaganda. As seen in the newsreels of the day, the war intensified as Australia was threatened by Japanese invasion. Real fear, the rising death toll and extended separation from loved ones grieved both the soldiers abroad and the women who posed for the pictures. The letters written to the girls back home prove the bonds between soldiers and pinups.

Using archival footage, photographs and artworks of the time as well as sections of letters written by servicemen, the chronological events of the war years act as a spine to the recollections of these Australians, now in their 80's. This film is not only about the culture of pinups and their collectors but also a study of the social standards and mores of a country faced with the realities of a threatened invasion by enemy forces.

The joyous images of the pinups open a window to the hopes and dreams of a nation at war.