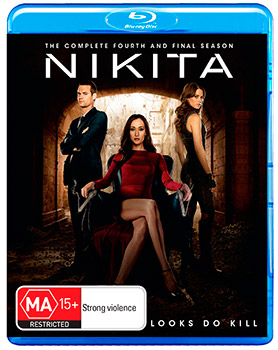 Get ready for the exciting conclusion of the sexy, gripping espionage drama Nikita. As a deeply troubled teenager, Nikita (Maggie Q ) was rescued from death row by a secret U.S. agency known only as Division. They faked her execution, claiming she was being given a second chance, the opportunity to begin a new life while serving her country. They took her to a hidden facility and trained her to be a spy and assassin. Yet despite her grueling training, she never lost her humanity and soon realized that she had been betrayed by the only people she thought she could trust, that Division was a corrupt organization carrying out unspeakable killings and crimes across the globe. So Nikita did what no one else before her had been able to " she escaped from Division and went rogue, exposing their covert operations, destroying their plans and trying to right their wrongs.

With punk hacker Seymour hardwired to the cause, Alex in the fold, and Owen back from a Russian prison, the new...

When drug-addicted teen Nikita (Anne Parillaud) shoots a cop in a robbery gone wrong, her sentence is death.

Thanks to Warner Bros. Home Entertainment here is your chance to win one of 15 x Nikita: The Complete Fourth and...