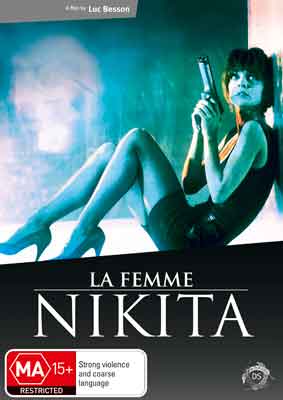 When drug-addicted teen Nikita (Anne Parillaud) shoots a cop in a robbery gone wrong, her sentence is death. But behind prison walls, she is given a secret ultimatum: harness her penchant for violence, or face her executioner. After three years of martial arts, weapons and etiquette training, Nikita is reborn as Josephine, a sexy, sophisticated assassin, released back into normal society with instructions to build a cover life for her killer job. When she meets Marco (Betty Blue's Jean-Hugues Anglade), it seems the murderous instinct of her teenage years may be behind her, but can she reconcile her new-found feelings with her deadly profession?

Review: When a young drug addict is convicted for the brutal murders of local police, she is recruited into a secret organisation that trains assassins. When Nikita finally makes it out for a birthday treat, her reward is a real life assassination test. Passing the test, she is released as a sleeper and finally finds love and happiness when her past catches up with her. A great action film.