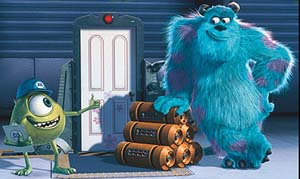 Synopsis: Since the very first bedtime, children around the world have known that once their parents tuck them into bed and shut off the lights, monsters lie waiting behind closet doors, ready to emerge. But what they don't realize is that for these monsters, it's nothing personal. It's just their job.

From the Academy Award-winning creators of TOY STORY comes this new computer animated comedy that opens the door to a world of monsters and mayhem. Monsters Inc. is the largest scare factory in the monster world and the top kid Scarer is James P. Sullivan (John Goodman), a huge, intimidating monster with blue fur, large purple spots and horns, known as "Sulley" to his friends.

His Scare Assistant, best friend and roommate is Mike Wazowski (Billy Crystal), a lime green, opinionated, feisty, one-eyed monster. Scaring children isn't such an easy job, though, monsters believe children are toxic and that direct contact with them would be catastrophic.

One night, Sulley finds himself on the "Scare Floor" after hours and discovers that a closet door has not been returned to the "door vault."

Opening the door to investigate, he unwittingly admits a young human girl into his world. Believing children to be toxic, Sulley tries to overcome his own fear and put things right but finds his situation worsening at every turn. He and Mike take the child - whom Sulley names Boo - to their home until things cool down and they can think of a plan. The next day, they disguise Boo as a monster and take her to the factory in the hopes of retrieving her door and sending her safely home.

Mike and Sulley risk their own safety and security as they race to get Boo back to the human world before someone discovers her presence.