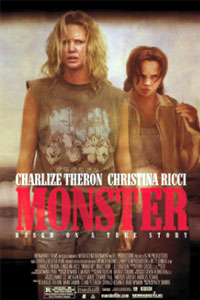 Based On A True Story.

Synopsis:
In a revelatory performance, Charlize Theron stars in the shocking and moving true-life story of Aileen Wuornos, a prostitute executed last year in Florida after being convicted of murdering six men. While Wuornos confessed to the six murders, including a policeman, she claimed to have killed only in self-defense, resisting violent assaults while working as a prostitute.

Bravely burrowing beneath the tabloid headlines about America's first female serial killer-and the media's sordid designation of Wuornos as an unrepentant monster-in the midst of the horrors and pathologies, first-time writer-director Patty Jenkins unearths an unlikely love story between two misfits.Nearing suicidal despair, Wuornos wanders into a Florida bar, where she meets Selby Wall (Christina Ricci), a young woman sent by her parents to live with an aunt in order to "cure her homosexuality." Wuornos-victim of a tragic, abusive upbringing-quickly falls in love, and clings to Selby like a life preserver. Unable to find a legitimate job but desperate to sustain her relationship with Selby, Wuornos continues working as a prostitute. When one of her johns turns violent, Wuornos shoots the man in self-defense; the first in her tragic string of killings.


My Verdict:
Charlize Theron thoroughly deserves her 2004 Oscar for best actress for her chilling, gritty portrayal of serial killer, Aileen Wuornos. She dominates the screen time and never lets up - surely it must have been incredibly hard to maintain that level of intensity for so long. It is such an amazing transformation from the actress to the character, that she was actually mistaken on the set for a stand-in. Aileen Wuornos was a troubled woman, who was abused her in her childhood, and can't seem to find a way out of her despair. When she stumbles upon the young, naïve Selby (Christina Ricci), she thinks she may have found that someone who can help her, who can love her and whom she can love in return. Christina Ricci is perfect as the confused Selby. She is young enough for the role yet has more than enough ability to carry off the part.

After a brutal, nasty experience with one of her clients', Aileen sees red and turns a gun on him, killing him. It was hard not to cheer for her - after all she was the victim. She keeps this secret for a while from Selby, hoping the incident will just go away and vowing to quit hooking. She doesn't last long before she is desperate enough to start up again as she and Selby need the money, and she kills again as her rage against her abusive past and her present dilemma escalates. It is like watching a volcano about to erupt - you just know that it's going to explode sooner or later and that there will be an overflow.

The main focus of the movie is on the relationship between Aileen and Selby, a tragedy in itself. The real Aileen Wuornos did allow her letters that she had written in gaol to be sourced for the film, which is where many of her thoughts and memories were revealed. Charlize as Aileen uses these sporadically throughout the film in voice-over, to aid the desperation, the heartache and feelings of an astonishing woman and are an excellent example of the mind of a killer. The title? It refers to a fairground ride that Aileen went on as a child - later to be used by the media as a description of her. But was she really a monster or a victim?