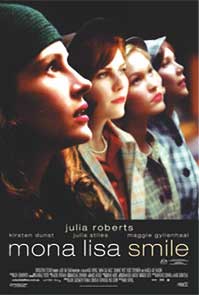 Synopsis:
Academy Award«-winner Julia Roberts heads an all-star cast featuring Kirsten Dunst, Julia Stiles, Maggie Gyllenhaal and Marcia Gay Harden in Mona Lisa Smile, an uplifting and poignant drama about one woman's desire to enrich the lives of her students.
In 1953, a time when women's roles were rigidly defined, novice art history professor Katherine Watson (Roberts) begins teaching at the prestigious all-female Wellesley College, which despite its academic reputation is an environment where success is measured by how well the students marry. Encouraging these women to strive for a more enlightened future, Watson challenges the administration and inspires her students to look beyond the image of what is, and consider the possibilities of what could be.


My Verdict:
Mona Lisa Smile is a very inoffensive chick flick that wouldn't hurt a fly. It is another Julia Roberts vehicle where she gets to use her very wide smile lots, much like many of her other successful movies, such as Pretty Woman, Runaway Bride, etc. As the new kid on the block, Katherine Watson, Julia does a perfectly good job with what the script allows for. She arrives from California to teach art history at Wellesley College, but after a year she is seen as a stirrer by the upper echelons of the college where education is seen to be secondary to becoming a wife. She is accused of encouraging independence in her students, of nurturing talent, and worst, of suggesting that there is more to life than aspiring to be the perfect wife. She does this through art, straying from the syllabus to emphasize that beauty is indeed in the eye of the beholder, and possibly not what the textbooks are telling. She aims to expand her students' knowledge and to allow their minds to at least consider art for its own sake. She even has to consider her life and her dreams during her time at Wellesley.

Kirsten Dunst is a student at Wellesley and plays the perfect bitch, Betty Warren, who has the most prim and proper mother. She is about to be married and thinks that this is what every woman wants, something she will begin to resent very soon due to her philandering, often missing husband. Her marriage is a sham, and she leaves a trail of destruction in her wake on her way to accepting how futile her life has become. This is where so much time is spent re-creating the 50's era and the philosophy that went with it. There is much attention to detail, the clothes, the d├®cor, the values, and the insanity of it all. But that's the way it was and who's to say that in 50 years time, we won't be looking back doing exactly the same and going "oh my god, did we really believe all that?"

Julia Stiles is another student at Wellesley, playing Joan Brandwyn, a burgeoning woman with a brain to boot. Katherine picks up on this very early and encourages Joan to look further than being Mrs Housewife. Mention must also go to Maggie Gyllenhaal as the ahead-of-her-time Giselle Levy even though at times, the character of Giselle seemed too mature to be a student at Wellesley. Marcia Gay Harden is also wonderful as Katherine's housemate, Nancy Abbey, and she is also the poise and elocution teacher (don't laugh!) at Wellesley. Nancy lives amongst chintz, chintz and more chintz and declares that an engagement ring on a young woman's finger is considered a bigger prize than a well-rounded education.Mona Lisa Smile has a nostalgic soundtrack that is sure to bring memories flooding back to many, along with the styles of the 50's. This is certainly no sex and drugs and rock and roll movie rather, it is almost quite a plain movie that will be a stroll down memory lane for some and a history lesson for others.
Rating: B-