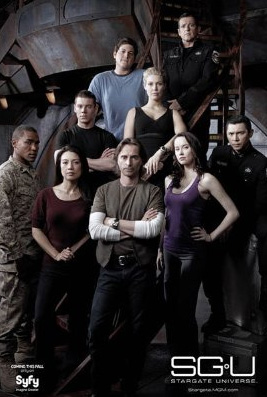 While beautiful Ming Na is no stranger to television, Robert Carlisle, who broke out following The Full Monty, is. Both actors star in this Fall's Stargate Universe, the latest chapter in the Stargate saga. Both were at this year's Comic Con and Paul Fischer sat down with them in a San Diego hotel room to discuss this and other projects.


QUESTION: For those who are completely unfamiliar with the Stargate universe, how does this new show fit into what has gone before?

MING-NA: Well, it fits in, in the sense that we have the Stargate. It's - the familiarity of it being set in the present time. So, all those elements that were the previous Stargate series still stay true - you know, we stay true to that. We're not, like, taking Stargates, and then creating a whole other world. And it's not set in the future, you know? So, those elements are the same. The characters are different. And the place of where these characters end up are different.


QUESTION: Now, if you've never seen any prior TV incarnations of Stargate, will you be able to attract a new audience? And, why would you be able to do that?

ROBERT CARLYLE: I think so. I think so, because, I mean, that would be me. I didn't know anything about it at all and of course, while you have to give a heavy nod to SG-1 and Atlantis, because they came before, it's not at all necessary to have seen any of that. I mean - you know, Richard Nelson does show up, and obviously he's General Anil. But there are four or five episodes Richard's in. And if you hadn't seen Richard from the previous one, you wouldn't think this character was anything other than what he is in this show. So, the link is there between SG-1 in that respect. But I don't think you have to know anything. I didn't know anything at all.


QUESTION: Robert, you're not known for being in these kinds of things. Your background is indie British, Scottish films, and that kind of background. Why were you interested in doing this, and why do you think they came to you with this?

ROBERT CARLYLE: That's a good question. Well, a couple of years ago - to be honest, Paul - I mean, the way things are in Europe, in terms of the film industry, it's so up and down at the moment, you know? And I was getting a bit fed up with that, to be honest with you. Projects that were coming and going, and coming and going. And I did two movies about 18 months ago, one called Summer, and one called I Know You Know. And my opinion, I think it's maybe two of the best performances I've given. And both these films have been seen by a total of about 20 people. And I've kind of had it with that. And I thought, "I want to go somewhere else that's got a bit more of an audience," you know? So, I kind of put it around with my agents and managers and stuff, that I was interested in going back to television, because I'd had a good experience playing Hitler with CBS, six years ago. 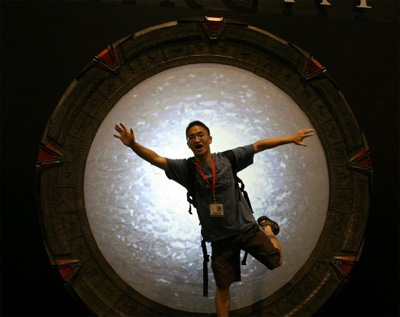 ROBERT CARLYLE: That sounds wrong. That does sound wrong. Re-phrase that for me, please.


QUESTION: "I had a good experience playing Hitler. He was the kind of guy I could really get into.

MING-NA: [LAUGHTER] It was very fulfilling. I had a good time, very good time.

ROBERT CARLYLE: So, that was for CBS. And also, a piece called Human Trafficking, which I did, which again was successful for me. So I thought, "Well, this isn't completely new to me, this world." And when I spoke to - to answer the same part of your question, when Brad and Robert - I eventually spoke to them on the phone, that was the first thing I said. I said, "Why the fuck do you want me to do this?" [LAUGHTER] And they kind of paused and said, "No one's ever reacted like that before when we've offered them a part." I said, "Well, I'm just being honest, because - in my bag, I don't know. Other gonna ask you the same question, why are you getting him, you know? So, through their answers and what they spoke about, that led me to believe that everything was gonna be okay. They just wanted someone, I felt, that was able to show a bit of a range, I guess. You're not sure with this guy what he is. You're not sure about Rush. You're not sure whether he's telling the truth.


QUESTION: Tell me about the character you play.

ROBERT CARLYLE: I play Dr. Rush. Dr. Rush in the chief, the lead scientist in this mob. In the beginning, when you join it, he has gathered everyone at this Icarus base, in order to take them through the Ninth Cheveron, which is the Holy Grail, basically. The base comes under attack. And instead of going back to Earth, Rush takes them to this other world. And you think, "Thank you, Dr. Rush, you've saved us. How do you get us home now?" He says, "What are you talking about? We're not going home." And I loved that. When I read the script, I thought, "I love it. I love it. What is in this man's head, he would go up there forever, and not want to come back?"


QUESTION: What ethnicity is he? Is he an American character?


QUESTION: Was that something you insisted on?

ROBERT CARLYLE: The guys asked. The guys wanted it.


QUESTION: You must have been very pleased. 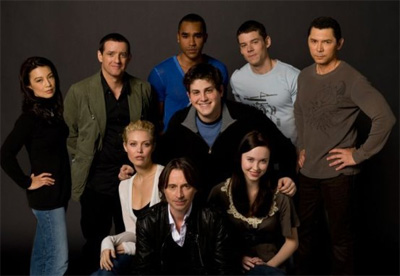 ROBERT CARLYLE: I was pleased. I was pleased. I mean, it's interesting - even during some of the read-throughs, I tried some different accents, the English. And after I thought - "I don't like this. It's making him very arch. It's making him instantly the villain." And - you know, that's too obvious, if he's like that. You shouldn't know with Rush whether he's even telling the truth or not. We've got a few scenes where -

MING-NA: Absolutely. You know, the great intrigue is that these people are thrown in a life and death situation, and this sense of survival comes up. And you don't quite know what everybody's agendas are. You don't quite know why. If he says something to me - you know, maybe he's just saying it to get my character to do something for him, as opposed to telling me the truth. So, there's a lot of great intrigue and distrust among the characters.


QUESTION: You're obviously no stranger to television.


QUESTION: You've done more TV series than I would care to remember. Some have taken off, some not. But, why do you feel this need to return to television?

MING-NA: When I became a Mom, that was my motivation. I didn't want to travel outside of LA. So, for - I would say eight years of my career, I called my agent and I said, "I don't want to work outside of LA. I need to stay home, I need to be a Mom." And television provides that. Most movies do not shoot in LA. Most movies shoot in other countries, other parts of the US. And - I just didn't want that. So, television is great. And I just love the family. I come from theater. It's the whole ensemble feel. You go to work every day, and it's with the same group of people. And I've been really fortunate that I actually like the group of people over a long period of time. It's - it suits me. Vancouver? That was a different story. That was the first time my agent came over and said, "Listen, I got you this part, and if you're interested, they'll make it work." You know. "They want you, but - you know, have a conversation with the executive producers." And I did. And - you know, they're trying to make it work for me.


QUESTION: Do either of you have anything in the pipeline beyond this?

ROBERT CARLYLE: I'm making a movie in the winter called Ironclad, which is a siege movie. It's actually set just after the signing of the Magna Carta. King John.


QUESTION: In the King John era.

ROBERT CARLYLE: King John indeed. Not a lot of people know what happened directly after the Magna Carta. The rebel army had disbanded, so, okay. He signed it, they all went home, and he went, "Oh, have you? Okay, I'm back." So, there's a bunch of rebels that are left behind. It's a true story. In fact, they went to Rochester Castle, and they held Rochester Castle against King John, and the returning royal forces. They held out for about three or four weeks, or something like that. I mean, it's a real Alamo-type film.


QUESTION: Does it go from that point? From the signing of the Magna Carta?

ROBERT CARLYLE: We don't see that. It's just after that. You actually join John on a ship, and find out where he's going.


QUESTION: Do you get a lot of flak for doing the Hitler movie?

ROBERT CARLYLE: No, I didn't at all. I didn't at all. People said I would. I was waiting for it. Didn't happen. [LAUGHTER] I think that because - you know, the piece was - was true. You know? And we weren't trying to do anything to - well, there wasn't any kind of fiction in this, you know. "It could have been like this, and it could have been like that." It was pretty much a straight telling of the story. And the biggest compliment with this piece is that it's now an educational tool in American colleges. And that's great. I'm very pleased with that. I'm very pleased with Hitler in the end. There's another misquote. [LAUGHTER]


QUESTION: And Ming, do you have anything else on the boil?

MING-NA: No. I've spent a lot of hours away from home doing this show, and I am very much looking forward to my hiatus being home with the kids. So, that's where I'll be. I'll be doing birthday parties!


QUESTION: So, you're happy balancing.

MING-NA: Yes, I am. I'm one of the few actresses that I think really - I feel truly put the family first and foremost. And I try to find that balance as much as possible.


QUESTION: Some of my male friends did want me to ask if you're still married.


QUESTION: I'll have to give them the bad news.

MING-NA: You can tell them I like to flirt, though. [LAUGHTER]