Michael Moore Where to Invade Next Interview 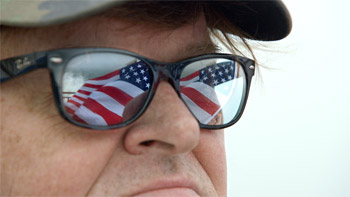 Michael Moore Where to Invade Next Interview

Synopsis: Where to Invade Next is an expansive, rib-tickling, and subversive comedy in which Academy Award®-winning director Michael Moore, playing the role of 'invader," visits a host of nations to learn how the U.S. could improve its own prospects. The creator of Fahrenheit 9/11 and Bowling for Columbine is back with this hilarious and eye-opening call to arms. Turns out the solutions to America's most entrenched problems already exist in the world"they're just waiting to be co-opted.

Where to Invade Next
Release Date: April 7th, 2016 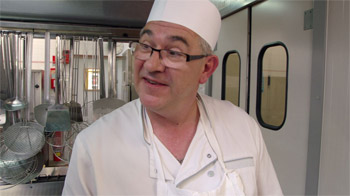 Question: What were the origins of this project?

Michael Moore: It really started when I was 19 years old. I had just dropped out of college and I got a Eurail pass and a youth hostel card and spent a couple months traveling around Europe. I was in Sweden and I broke my toe, and somebody sent me to a clinic. Not much you can do with a broken toe, but they did what they could, and I went to pay the bill, and there was no bill. And I didn't understand it. Seriously, I had never heard of such a thing. And so they explained to me how their healthcare system worked, and all through Europe I just kept running into little things like that, thinking, 'That's such a good idea! Why don't we do that?"

My original idea was to go and invade other countries and steal things"other than oil. And I would do it without firing a shot. I had three rules: (1) don't shoot anybody; (2) don't take any oil; and (3) bring something back home that we can use. It became clear to us once we were invading these countries that it would be much better if I made a movie about America without ever shooting a single frame of this movie in America. What would that movie look like? I liked the challenge of that.


Question: How did you select the countries to invade?

Michael Moore: Part of it was just getting out of the United States and traveling. Traveling and paying attention. A few years ago, I was on the street corner in Washington, D.C. and this woman comes up to me and says, 'We are number one in education," and she was the Education Minister of Finland and she handed me a book about Finland"one hundred things that Finland does right. And she told me about how Finland's schools got rid of homework, and I just thought, -I'm getting punked right now.' We had a production meeting before we left with my field producers and crew and I asked did they know this particular thing? Had they read this, had they heard about that? And even though I have some very smart people"smarter than me"who work on the films (a couple of them went to Harvard, one went to Cornell, another to Dartmouth); even though we all read three papers a day; most of the stuff in this movie we didn't know. So, I thought if that were the case, it would be fresh for an audience. I like to go to movies and learn and experience things I don't already know.


Question: How are you able to preserve the elements of surprise and spontaneity in your films when they require such deliberate planning?

Michael Moore: I don't want to act. I want my reactions to be real. You can't ask the people you're interviewing to do or say something a second time. They are not actors, then they try to act, and the audience knows it, it sucks. We've seen too many documentaries like that. So it has to happen in the moment, and it has to happen with me in the moment, too. And that's why sometimes if I say something and it's funny, it's funny, and sometimes it's not so funny. But it's just what I said. So I'm not trying to go for, 'Hey, writers, get me a funnier line." 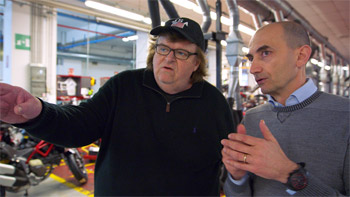 I don't think, 'Geez wouldn't it be cool if I took a can of Coke in and sat it down on the lunch table to see what the kids do." It was like, 'I want a fucking Coke." And there's no vending machines in the school. So a production assistant had to run into town and get me a Coke. And it's just sitting there"so what happens then just happens.

The scene at the Berlin Wall, it was absolutely not planned to be in the film. It was only because Rod Birleson, who was the executive producer of the film, and who also had gotten a Eurail card and a youth hostel card"we've been friends since I was 17"he was there, we were in Berlin, and mostly just for nostalgia, we thought -wouldn't it be cool to have just for our scrapbook, let's shoot some video of us at the wall, 26 years later, from that night we were accidentally there in Berlin. Why don't we go down there and take some pictures and we'll just walk along, and reminisce, and we'll give this to the grandkids someday.'

Sometimes the best stuff is the stuff I don't plan out. And the research that my field producers do, I have them tell me only the basics. I don't want to know the details. So for instance, when the Italian couple says to me that they get their honeymoon paid for, 15 days, and you see my reaction, that's real! I'm hearing that for the first time. Even though my producers may have known that, they didn't share it with me.


Question: Talk about your decision to pick the flowers, not the weeds.

Michael Moore: The mainstream media does a really good job telling us night after night how all the rest of the world is just so bad, they pay so much in taxes, and it's just awful. And look, a lot of it is awful"and you get to watch it and read about it on television, in the papers, online. But every few years, I'll ask for two hours of your time to present the other version, the other truths about what goes on. If you want to know why I didn't point out Italy's high unemployment rate, my answer to you is that I went there to pick the flowers and not the weeds. Other people can pick the weeds, but I wanted to show"especially my fellow Americans, but certainly people around the world"the contrast between the two. I wanted to say to Americans that we trust the level of your intelligence and experience, you already know the truth, you already know everything, you don't need to go and watch another documentary to tell you how fucked up this thing is, or that thing is. We need to get off our asses and do something, and get inspired by what we could be.


Question: Critics are calling this your most optimistic film to date. Is there some truth to that?

Michael Moore: Maybe I've just come up with a more subversive way to deal with the anger I feel about the condition of this country. I've never been a cynic. I've always believed that cynicism is just a different form of narcissism. And I do believe in the goodness of people and I do believe that most people have a conscience, and they know right from wrong, and they know what we should be doing, and they're just afraid, or they're ignorant, and once those things get fixed, we stop living in fear and we stop being stupid, things will get better. 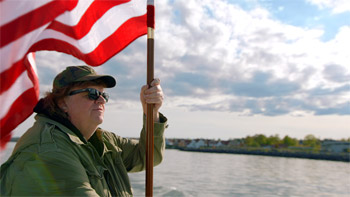 I have been writing about private prisons, women not being equal parts of the power structure and other issues for a very long time. I should be much more pessimistic and cynical than I am. Nothing has changed, and yet to me everything has changed. After the 2004 election when all those states made it part of their constitution that if you love somebody of the same gender you couldn't marry them, that was just 10 or 11 years ago. Now, it's gone. Obviously it was a long struggle. But things change all the time. When you look at the things that have happened in our lifetime if you're my age: the Berlin Wall, Mandela; when you look at what's happened this year alone in the United States, I actually think it will get better, but think it's going to happen because young people are going to make it happen.

I turned 60 years old, my father passed away last year and that had a real impact on me in a way that I didn't think it would. After his death, I felt more alive and wanting to live. I don't think he would want me sitting around depressed for a year. And I just went the other way with it.


Question: The film makes an explicit argument for putting more women in power, in government and business. Did you start with that premise or did you arrive at that conclusion organically?

Michael Moore: It grew organically. We were going to show some things about how women had more power, and more women are elected in other democracies. But, as I said in the film, as we went to each country, we were shown, or talked to, or saw things because women actually have this kind of power. And it's not just Iceland, where 40% of the corporate boards have to be women. That's the same in Norway, I think actually Norway started it. In Germany now it's 30% of a corporate board has to be female. It just seemed, well, if you noticed that in these countries where women have real power"not the fake power that women have here"you know, where 20% of our Congress are women. The majority gender, 51–52% percent of the population has 20% of the Senate and 20% of the House. And the sad thing is, for historians, 100 years from now, is that we've left behind film and videotape showing ourselves being really happy that 20 women got elected to the US Senate. And they're the majority gender, and the minority gender has 80 seats. It's crazy.

Where to Invade Next
Release Date: April 7th, 2016

The Temperature Where Freedom Burns! A controversial and provocative film.