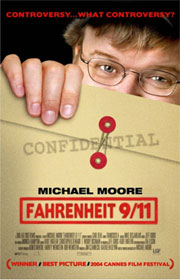 The Temperature Where Freedom Burns!

Synopsis:
One of the most controversial and provocative films of the year, Fahrenheit 9/11 is Academy Award-winning filmmaker Michael Moore's searing examination of the Bush administration's actions in the wake of the tragic events of 9/11. With his characteristic humour and dogged commitment to uncovering the facts, Moore considers the presidency of George W. Bush and where it has led us. He looks at how - and why - Bush and his inner circle avoided pursuing the Saudi connection to 9/11, despite the fact that 15 of the 19 hijackers were Saudis and Saudi money had funded Al Qaeda.

Fahrenheit 9/11 shows us a nation kept in constant fear by FBI alerts and lulled into accepting a piece of legislation, the USA Patriot Act, that infringes on basic civil rights. It is in this atmosphere of confusion, suspicion and dread that the Bush Administration makes its headlong rush towards war in Iraq - and Fahrenheit 9/11 takes us inside that war to tell the stories we haven't heard, illustrating the awful human cost to U.S. soldiers and their families.

My Verdict:
'Fahrenheit 9/11' will and is already becoming one of 2004's must-see movies. Regardless of your previous opinion of the USA and it's involvement with questionable characters, this movie will offer some insights that may make you change your mind, or convince you that you've been right all along. Whatever the case, it is a captivating, moving, entertaining, and ultimately intriguing documentary on the George W. Bush administration, and some of the events that have taken place since September 11th, 2001, including the war on Iraq.

The movie is typical Michael Moore. It moves along so that it is never boring, containing a mix of the graphically shocking and the funny. Moore narrates the movie, including some very witty lines, but also adding some very biting dialogue that is intended to be provocative and outrageous. Tongue in cheek, Moore goes about his business, where no-one is spared: he shows George W. Bush's reaction on being told of the September 11th attack, he shows Britney Spears thoughts on the President, he shows the unemployment in his hometown of Flint, Michigan and these are but a few of the multitude and variety of images he uses to spread his message. A highlight is his attempt to lure Congressmen into signing their children up for the armed forces: "There's not that many congressmen that've got kids over there… In fact, only one… Maybe you guys should send your kids there first. What do you think about that idea?"

If you have never seen a Michael Moore movie, television program, or read one of his books, 'Fahrenheit 9/11' is the perfect opportunity to acquaint yourself with his work. Some have called his work blatant propaganda, and others a revelation; it's really your choice to decide. Michael has a way with words that can be described as witty, sarcastic and even cynical, yet always very entertaining, and his work in this film is powerful and thought provoking, and for that alone it makes this documentary well worth seeing.