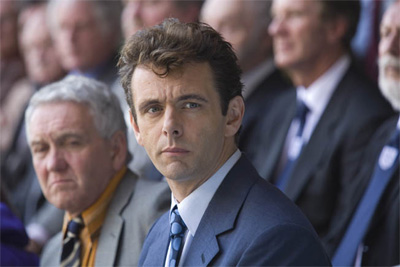 When it comes to playing real-life characters, Michael Sheen has the market cornered, from Prime Minister Tony Blair to David Frost. In his latest film, the very British Damned United, Sheen is uncanny as Leeds soccer coach Brian Clough, a former manager of Derby County and a fierce critic of Leeds's style of play under his predecessor Don Revie. Soon to be seen in the next Twilight, and heard in Tim Burton's Alice in Wonderland, the always-busy actor talked to Paul Fischer in this exclusive interview.


QUESTION: I guess the obvious thing Michael, in the few times we've spoken - is that you're the go-to man for real-life characters. And I'm just wondering, what do people see in you that make them want to cast you in these roles?

MICHAEL SHEEN: Well, I think it's basically the fact that they're all written by the same man. It's Peter Morgan, who wrote The Queen and The Deal, and Frost/Nixon, and now The Damned United, and the next one, A Special Relationship. He - they're all written by him. We work very closely together, and have done now for quite a few years, so we've become about it of a team. So it's not like I'm doing all these real-life parts for lots of different people, and lots of different writers and directors. It's very much a sort of collaboration between Peter and myself now.


QUESTION: Now unlike the last couple of films, this one is a much more parochially British story. How universal do you think it is, and what are the challenges do you think of selling a movie like this to Americans?

MICHAEL SHEEN: Well, even though it's a British story, I think it's a film that's set in the world of football, but it's not about football, in the same way as - you know, Frost/Nixon wasn't about politics, or about TV interviewing, particularly. You know, it was about these people, and the relationships between them, and what they've got at stake. I think the same is true with Damned United. I've been very heartened by the fact that a lot of people have said to me, "I've got no interest in football. I didn't know who Brian Clough was, but I really loved the film." And in terms of selling it to Americans, I have no idea, because that's not my job, but I think if people get into the cinemas and watch the film, they'll love it, because the only thing they have to consider - in one respect, that it's set in the world of football, is that it's set in a world that is full of passion and drama, high emotions and high stakes. And - but ultimately, it's about the relationships between these people, and this one extraordinary man.

QUESTION: You seem to have completely immersed yourself into this character. I mean, I'm not familiar with the real guy. But from what I gather from reading British reviews of it, it's a pretty uncanny portrayal. How challenging was it for you to get into this character, and where do you draw the line between playing a part, and impersonation?

MICHAEL SHEEN: Well, these are pretty big shoes to fill with Brian Clough. He's such a huge, iconic figure in Britain, and someone who I was very much aware of as I was growing up. He was - he was always a hugely entertaining figure on TV in Britain. He was outrageous and controversial, and - you know, full of arrogance, it seemed. Very opinionated, but very funny. And that was the thing that I always remembered about him, was how funny he was. How entertaining he was. So, they were very big shoes to fill. And also, someone who people have a huge amount of affection for now. He was a bit more divisive, I think, when he was alive. And made people - you know, you either loved him or you hated him. But nowadays, I think looking back, people have only affection for him. So, it was - it was a difficult challenge to take on board, you know. But - I just did months and months and months of research and work, and tried to totally immerse myself in his life and his world. And I suppose - you know, I - well, the easy thing of, what stops me from doing an impersonation is that I can't do impersonation. [LAUGHTER] That's the simple answer. But the longer answer is that - you know, I'm not trying to just copy what's - you know, how he sounds, and what he looks like and how he moves, and that kind of stuff. I'm trying to get to something a bit more essential about the man, and just immerse myself in his world and to make an imaginative and emotional and psychological connection with it. And then just sort of - let that - let that play out in the story. You know, it's - he's ultimately a character in the story that Peter Morgan's written. So, I use what I know about him in real life to help that, but ultimately, it's - it's the demands of the story that take precedence.


QUESTION: Are you a fan? I mean, were you a fan before you worked on this?

MICHAEL SHEEN: I was. I wasn't a supporter of Nottingham Forest, or Leeds, or Darby, or any of the teams that he was manager of. But I certainly was a fan of his. I thought he was a fantastic figure. And when I was growing up, I was more aware of him in Nottingham Forest, because I was too young for the other teams that he managed. But I was a huge football fan. I played a lot of football. I wanted to be a football player when I was a kid, and had the opportunity to maybe - to go down that path. But I was a massive football fan, and still am.


QUESTION: How did the British sports media react to this movie, if at all? Was there any reaction, positive or negative?

MICHAEL SHEEN: It was all very positive, as far as I was aware. There was a lot of anticipation for it. Whenever-whenever I went, really, in the build-up to - before the film came out, people were saying how much they were looking forward to it. And - and a very positive reaction. I think, like I say, he's a much-loved figure within the world of sport. I think people were really pleased there was gonna be a film about him. And I got - we got a lot of cooperation from people within the world of football, in terms of making the film. And a lot of good, positive reaction to it when it came out.


QUESTION: Is there a historical figure that you have this yearning desire to play, that is kind of gnawing at you at all? Or do you think you really would like to give these kinds of characters a bit of a break?

MICHAEL SHEEN: No, I don't go looking for historical characters to play. I - I look for really good scripts. So, when a really good script comes along, then that's something that I want to be a part of. And Peter Morgan just happens to have written these amazing scripts. They're-you know, the best scripts that have come my way. And - and so I'd be a fool to say no to them, really. to be honest, I don't see any drawbacks with - with being involved in - in great stories, great scripts, and great films. So I've got no - no worries about that.


QUESTION: Now, you're coming up in some pretty big movies.

MICHAEL SHEEN: Yeah. There are a few big movies coming. There's New Moon, and Alice in Wonderland, and there's Tron.


QUESTION: So-yeah. So, a couple of - three low-budget films.


QUESTION: New Moon is obviously one of these - the franchise that is so highly anticipated. How prepared are you for the - for the response to a movie like that? I mean, do you ever prepare yourself, or do you just go with the flow?

MICHAEL SHEEN: I just go with the flow, really. I mean, there's certainly a lot of media attention on it, because obviously, everyone I do an interview with wants to ask about it. So I'm aware of that and I'm aware that there's a very passionate and devoted following, which includes my own daughter. So , I'm looking forward to being a part of all that. I enjoyed making the film. I like the character very much. I'm very much looking forward to the decibel level I've been told about coming from the Twilight fans at the premiere.


QUESTION: Who are you in this movie?

MICHAEL SHEEN: I play a character called Aro, who's the leader of the Vulturi, who's the sort of head vampire.


QUESTION: Are different acting muscles required to play a character of such imagination, as opposed to a much more real or grounded character, as in Damned United?


QUESTION: What about Wonderland? How much fun was it, working on that?

MICHAEL SHEEN: It was great. All the animal characters in Alice in Wonderland are CGI and animated. So, we're just providing the voices, really. And - and a bit of then - they filmed sort of some of our movements and stuff, to help with the animation. But ultimately, it's mainly the vocal work. So it was just such an honor and a pleasure to - to be part of a Tim Burton film. I've been - you know, a massive fan of his. And - to get to work with him on Alice in Wonderland was sort of - you know, it's a marriage made in heaven, really. Tim Burton and Alice in Wonderland. So, it was great. I wish I could have been involved even more.


QUESTION: What surprised you the most about working with Tim?

MICHAEL SHEEN: Gosh. There were no real surprises. I know he's a phenomenally talented and incredibly creative and imaginative guy. And I wasn't disappointed in that. He's a very nice man, and very - very warm, very generous, and very - just really pleasant to be with.


QUESTION: So, beyond Tron, what else are you planning on doing at this point?

MICHAEL SHEEN: Well, the next film I'm shooting is here in LA. It's an independent film called Beautiful Boy. And I start that in a few weeks' time. And then next year, I think we'll have a film that I did with Samuel Jackson called Unthinkable.


QUESTION: Oh, yes, I remember that. You play the guy who's being accused of terrorism?

MICHAEL SHEEN: That's right. So, that'll be coming along at some point. And then we'll see. So, next year's sort of starting to take shape now with a few different things, but nothing absolutely confirmed yet. So, we'll see what happens.


QUESTION: Who do you play in Beautiful Boy?

MICHAEL SHEEN: It's me and Maria Bello, and we play a married couple who have a son who gets involved in a sort of Columbine-type shooting.

After tackling Tony Blair and David Frost, actor Michael Sheen turns to another driven historical figure: football manager Brian Clough. Talented but abrasive, Clough alienates some of those around him, including his rival, Don Revie. When Clough has the chance to coach Leeds, Revies former team, he takes on the role of the manager of the countrys best soccer team. Also starring Timothy Spall, Jim Broadbent, and Colm Meaney, this film marks the fourth time screenwriter Peter Morgan (THE QUEEN, FROST/NIXON) has crafted a character for Sheen.