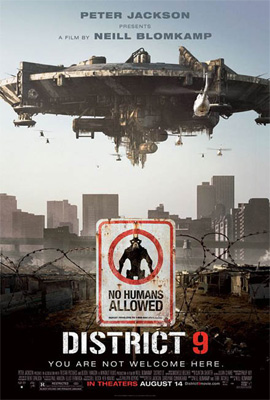 South African director Neill Blomkamp began his career in special effects, which clearly prepared him for the seamless work in his much talked about feature, District 9, a film that offers political and social commentary in a taut sci-fi thriller. As the film begins, we are made aware that thirty years before the story takes place, aliens made first contact with Earth. Humans waited for the hostile attack, or the giant advances in technology. Neither came. Instead, the aliens were refugees, the last survivors of their home world. The creatures were set up in a makeshift home in South Africa's District 9 as the world's nations argued over what to do with them. Now, patience over the alien situation has run out. Control over the aliens has been contracted out to Multi-National United (MNU), a private company uninterested in the aliens' welfare - they will receive tremendous profits if they can make the aliens' awesome weaponry work. So far, they have failed; activation of the weaponry requires alien DNA. The tension between the aliens and the humans comes to a head when an MNU field operative, Wikus van der Merwe (Sharlto Copley), contracts a mysterious virus that begins changing his DNA. Wikus quickly becomes the most hunted man in the world, as well as the most valuable - he is the key to unlocking the secrets of alien technology. Ostracized and friendless, there is only one place left for him to hide: District 9. And a relationship between himself and an alien changes his own life forever.

The film is produced by Oscar winner Peter Jackson, and director Blomkamp is now the toast of Hollywood. He spoke to PAUL FISCHER in this exclusive interview in Los Angeles.

QUESTION: Now, you've been developing this for a while. First of all, what were the stages of development? What was the inspiration for the script, and did you do it as you went? Did you come up with one whole big script?

NEILL BLOMKAMP: Yes, we did.

NEILL BLOMKAMP: That is what we did, yeah. I mean, because of the improv and everything is why you're asking, right?

NEILL BLOMKAMP: No, the film needed to have a structured script, and a structured idea of what we were doing. It's just that within each scene, Sharlto, predominantly, and then the other actors, were allowed to really make it their own, and be able to make it feel real, really. So, what I was doing during those performances and those multiple takes is making sure that beside them feeling real and authentic, that the core of the story, and whatever this particular scene needed to convey, was happening. So, I guess - you know, we wrote the film throughout 2007, and had the script, and then went off and shot it. We just shot individual scenes in a different way.


QUESTION: At which point did Peter come on board?

NEILL BLOMKAMP: Right at the beginning in 2005, when I was doing commercials, I directed a short film called Alive in Joburg, which represents the very basic core idea of District 9. So then I got hired to do Halo, which I was directing and he was producing. Then Halo collapsed and within a few days of it collapsing, we just decided to turn Alive in Joburg into a feature. So, he's been with it since day one. It happened because of him.


QUESTION: Do you feel this is a comment on post-apartheid South Africa?

NEILL BLOMKAMP: Well, there's no question that there's a hell of a lot of important topics in there. But I definitely actively tried to not beat the audience over the head with it. And rather, take all of the elements about South Africa that interest me, and the real racial history, as well as the black-on-black xenophobic stuff that's been happening since all of the Zimbabwe immigrants have been coming into the country. And I incorporated that, also. So really, I just used all of the elements of South Africa that make it South Africa.


QUESTION: And District 6 existed during apartheid. 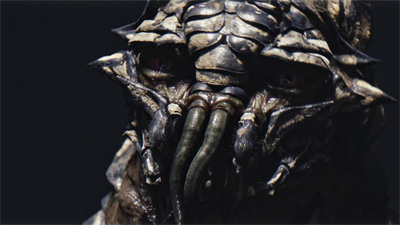 QUESTION: So if you know about history, I guess there was that parallel as well.

NEILL BLOMKAMP: Yeah. And the forced removals, and all that, but, I mean, yeah. It was meant to incorporate all of the elements that make up South Africa's background, but in a subtle sort of fabric in the movie. And the personal story is in the foreground.


QUESTION: I understand this movie cost something like $30 million, roughly, to make.With all the CGI that you incorporated - first of all, with the development and the creation of the aliens, was CGI the only option that you considered, or were there others?

NEILL BLOMKAMP: No. No, we actually even shot footage with prosthetic suits. But, I mean, it just simply doesn't work with the 21st century audience. They're just too smart for that. So if you watch the film now, it's all digital creatures. And I was forced to go in that direction, and it just doesn't work.


QUESTION: Niw obviously, computer graphics have come a long, long way in the last decade. You couldn't have ever made this film even three or four years ago.

NEILL BLOMKAMP: Yeah, it would have been pretty difficult.


QUESTION: How difficult was it for you to render the individuality of these aliens in such a detailed, rich, and complex way?

NEILL BLOMKAMP: Well, I mean, ultimately - you know, each alien really is its own three-dimensional little CAD model, essentially, right? So what you can do is, you can just individualize each one of them. Like, you can pull each alien out and then go, "Okay. On this one, I want him to have screwed spark plugs into his shell, and that's what identifies him. Or, this other one has bound plastic bags around his wrists." So really, it's more in the conceptualization, I guess, of each alien, rather in the execution of it, if that makes sense. You know? It's like, applying sort of a mindset to how you're gonna go about creating them, as opposed to the creation of them itself. So, that was the one thing, was individualizing the aliens. And then also, just things that I knew - because I have a background in visual effects. It was things that I knew would help make them feel real. Like, put them in a harsh lighting environment, because that tends to look more real than, say, a whole bunch of black light disco environment. The computer's going to have a more difficult time rendering that than harsh sun.

NEILL BLOMKAMP: Well, Sharlto doesn't have enough knowledge in visual effects for it to ever affect him, I think, from a visual effects standpoint, but he's talented enough as an actor and as a performer, that he just slipped into it without even knowing. I mean, it's like - it's his real calling, you know? He just hasn't done it before. But I saw that, though. And now he's got a different future ahead of him, if he chooses to kind of become an actor, I guess.


QUESTION: How surprised are you by the film's response? And secondly, how astounded were you by Comic-Con?

NEILL BLOMKAMP: Well, I think, first of all, I feel an overwhelming sense of relief, really. You know, it still hasn't come out, so I don't know if it's going to make its freakin' money back. But the idea that I've been working in a vacuum for 2 ˝ years - and then you show it to people, and they seem to really like it - is such a good gratification, after all of the work - I mean, I can't imagine doing all of that, and then have people go, like, "Oh, it's really not that good. It's kind of crap." It just would be a brutal experience. So, I didn't know that. You know, you really don't know that. So on the first screening, when we shot it in San Diego, I was really happy that it just seemed to be working out.


QUESTION: Hollywood being Hollywood, if this movie does make hundreds of millions of dollars, they will ask you to do another one, or to do a sequel.


QUESTION: Have you considered that possibility?

NEILL BLOMKAMP: I would totally consider doing a sequel.


QUESTION: So, you'd have the aliens come back?


QUESTION: Given how this film's been received, what kind of door has it opened for you in Hollywood now?

NEILL BLOMKAMP: Well, again, it's a little bit tough to tell, because the only thing I think that means anything in Hollywood is the bottom line, more than any sort of critical response. So, after August 14th I'll either be able to kind of get a whole bunch of other films, or kind of - you know, revert back to commercials.


QUESTION: Do you know what you want to do next?

NEILL BLOMKAMP: I have an idea of what I want to do next. Which is - besides a sequel for this, should the world want it, I have a science fiction idea that I'm pretty invested in, that I really want to get made. It's another sort of - it's another idea of mine.


QUESTION: Do you hope to work with Peter again?


QUESTION: Most commercial directors, when they make films, have a slickness to their work.

NEILL BLOMKAMP: [LAUGHTER] A sickness would have been funnier.


QUESTION: Well. You know, the Scots, obviously, and a lot of these British guys who are coming from that world.

NEILL BLOMKAMP: Ridley's a little different, though. But there's a real essence to their films. It's not just slick. Like, that's what makes Ridley so cool. It's like - it's slick and polished, mixed with a real story, or a real message.


QUESTION: But this is a gritty - there's a rawness to this movie that you would not necessarily expect from somebody from a commercial background. Is that because we're used to a lot of fast cutting, and is that visual style that is incorporated in this movie something that you incorporate in your commercial work?

NEILL BLOMKAMP: Yeah. I think it's pretty accurate to say that a lot of the commercials that I did had a similar style to what District 9 is. It's just what I seem to be evolving into, really. But - I also - I mean, I didn't do thousands of commercials, you know? I only really started getting into commercials by the time I started doing Halo. So, I definitely - I have no kind of career that can be - you know, I can't draw any comparisons to really famous commercial directors, because I just didn't get there.