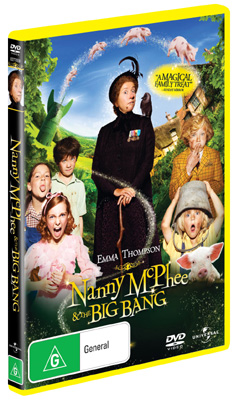 Q: What drew you to the role? Did you particularly want to make a familyfilm?

Maggie Gyllenhaal: It was the script, and Emma. Shes so great.


Q: Were you a fan of the first film?

Maggie Gyllenhaal: I hadnt seen the first film when I decided to do the movie. I then watched itof course and I thought it was great.


Q: In what ways is this one different to the first film?

Maggie Gyllenhaal: I think its a little darker. I think it really deals with some of the complicatedtough things about being a kid. Its a real fantasy. I think its hard being a kidand this movie acknowledges that and I love that about it.


Q: They say never work with children or animals and there are plenty ofboth in this film. How did you find that?

Maggie Gyllenhaal: I didnt work much with animals in the movie, but I did work with a lot ofkids and they were so adorable. The thing about kids is, if you can create anenvironment on set where they feel free, then theyll act like kids. Someonewhos acting like a kid is so fun to act with because you never know whattheyre going to do. At the same time this movie is very technical - with fivekids, animals and CGI - so you have to break it down into little pieces. Emmaand I were often on our knees just off camera, making funny faces and tryingto get a reaction out of the kids which was fun and a whole other skill set thanacting...


Q: How did you find working with Susanna the director?

Maggie Gyllenhaal: Susanna was lovely. Actually, I kind of based my accent on hers, I love theway she talks. Sometime you work with a director and its like you have to doit all by yourself, its like a boomerang, playing with yourself. But, withSusanna, there was a dialogue going and she had interesting ideas and Ireally liked it.


Q: Who would win a fight between Nanny McPhee and Mary Poppins?


Q: If you could travel through time, like Nanny McPhee, where wouldyou like to go and why?

Maggie Gyllenhaal: There are so many times Id like to go and see. Id like to know what it waslike in New York when my great grandparents came over and what it was likein the Ukraine and Russia, where they came from; that immigrant journey thatdoesnt happen anymore. I flew to London in seven hours and I slept thewhole time, so Id like to see what that was like.


Q: In what ways could you relate to your character in the film?

Maggie Gyllenhaal: I think Mrs Green is so big hearted; I used to tell Emma I think I need togrow my heart in order to be warm enough to play her. Shes this warmhearted, lovely, loving person and also totally overwhelmed and in over herhead dealing with too much - that I can definitely relate to. I think everymother can. I love that the movie says you can be overwhelmed, be besideyourself and still be a good mother, but you will be overwhelmed and besideyourself if you are a mother. Its part of the job description and I love that.

I'm Nanny McPhee and I wanted to take this opportunity to tell you about my new film, NannyMcPhee and The Big Bang which will be available on Blu-ray and DVD from August 4.

On this particular adventure, I travel to a farm where a war has broken out between some veryboisterous country children and their pompous city cousins. When I saw the stress this wascausing their poor harried mother, well I just had to step in to help them learn how to livepeacefully with one another.

With my trusty magic stick in tow and a bit of help from some very lively animals, I was able toimpart five very important life lessons - all while having fun along the way, of course.If I'm [Emma Thompson] not a big enough draw card for you and my pearly pieces of wisdomare of no use to you, I'm joined on my adventure by some fairly major heavy hitters includingMaggie Gyllenhaal, Maggie Smith, Ewan McGregor, Bill Bailey, Rhys Ifans and RalphFiennes.

There are also lots of hilarious special features that I'm sure will keep the whole familythoroughly entertained for hours on end.