Disney's global hit, The Lion King, will be launched for the first time on DVD in February 2004. This classic and timeless tale that has captured so many hearts will undoubtedly become the biggest family DVD of 2004.

One of Disney's biggest children/family movies and still holding in the top 10 movies. The entire franchise, which covers the recent IMAX release, video, stage show, TV series, soundtrack, publishing and merchandise, is the world's number one licensed entertainment property. It's no surprise, for you will all remember the trademark opening African call and theme song 'Can you feel the love' which touched us all so deeply.

The Lion King is set amid the majestic beauty of the Serengeti, Disney's epic coming-of-age saga tells of the love between a proud lion ruler Mufasa and his son Simba, a naïve and curious cub who "just can't wait to be king". When Simba's envious Uncle Scar schemes with his hyena henchman, including Shenzi, trouble invades the kingdom. To the rescue comes a hilarious meerkat named Timon and that warm-hearted warthog, Pumbaa, and soon Simba joins in the carefree lifestyle of "Hakuna Matat". With Rafiki at his side, Simba reclaims his true destiny and joins the "circle of life".

The new DVD is sensational, not only can you watch and listen to the movie in its original format, but now there is an amazing second option innovated by Disney. The new 5.1 Disney Enhanced Home Theatre (DEHT) Mix is state of the art and has been specifically designed for home theatre systems, creating dynamic and spatially enhanced audio-sensory experience. Bringing movie sound quality to your home, a remarkable difference.

The Lion King DVD comes with two discs that are jam packed with hours of entertainment and fun education. 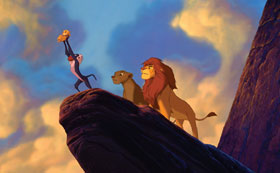 The Lion King Special Edition DVD represents the film's first-ever digital presentation of the film - completely new and enhanced viewing experience.Two version of the film are included: The original theatrical release & special edition with all new song "Morning Report" taken from the stage production.Rare deleted scenes.
All new 3D animation has been created exclusively for the DVD.

Zazu hosts you a fabulous trek through the different realms of the DVD kingdom.