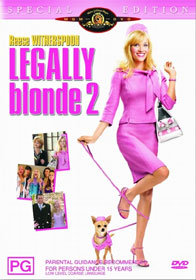 When Elle (Witherspoon) discovers that her lovable chihuahua Bruiser's mum is locked in a cruel animal testing facility, she puts aside her budding law career - and her wedding plans - to campaign for animal rights......and respect for blondes everywhere! But can she rescue Bruiser's mum and give politics a makeover before her big wedding day?


Audio Commentary by the Cast
Featurettes: