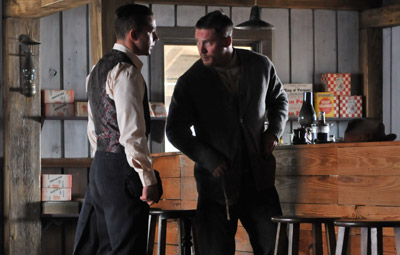 Synopsis: 'We control the fear, you understand? Without the fear, we are all good as dead.'

Acclaimed director John Hillcoat delivers a thrillingly vivid slice of American outlaw history in his epic gangster tale, Lawless. Lawless is the true story of the infamous Bondurant Brothers: three bootlegging siblings who made a run for the American Dream in Prohibition-era Virginia. Based on author Matt Bondurant's fictionalised account of his family, "The Wettest County in the World," the film gathers an ensemble of gifted, dynamic new-generation stars - Shia LaBeouf, Tom Hardy, Jessica Chastain, Jason Clarke, Mia Wasikowska, Dane DeHaan - alongside two of the finest actors of their generations, Guy Pearce and Gary Oldman. A riveting, intense story of crime and corruption, loyalty and love, brutality and tenderness, Lawless is a rich addition to the American gangster canon.

In the mountains of Franklin County, Virginia, the Bondurant brothers are the stuff of legend. The eldest, Howard (Jason Clarke), managed to survive the carnage of the Great War, but he returned home unmoored by what he had seen and done. His brother Forrest (Tom Hardy) nearly died from the Spanish Flu that took his parents. He beat back death with a quiet strength and ferocious, visceral invincibility that came to define him. Jack (Shia LaBeouf) is the youngest sibling, impressionable, sensitive, smart. Times are tough and jobs are scarce, but the Bondurants are entrepreneurs and have built a thriving local business by concocting an intense and popular brand of moonshine. But Franklin County's bootlegging days are about to end with the arrival of Special Deputy Charlie Rakes (Guy Pearce) from Chicago. The new "law" Rakes brings is lethal and corrupt and will challenge everything the brothers have built and represent. But while the rest of the county gives in to Rakes' ruthless crackdown, the Bondurants will bow to no one.

As the family rallies to fight Rakes, the fraternal dynamic shifts. Jack's ambitions and enterprises alter the balance of power between the brothers as he careens into manhood. Dreaming of expensive suits, fast cars and beautiful women, Jack starts his own bootlegging operation, with his friend Cricket (Dane DeHaan) helping him to soup up cars and build stills - even against Forrest's wishes. Jack starts to prosper, even selling his moonshine to Floyd Banner (Gary Oldman), the big city gangster he idolises. The lives of the Bondurants are soon complicated by the appearance of two beautiful women: the exotic, steadfast Maggie (Jessica Chastain), who brings a secret past with her and catches the eye of the guarded

Verdict: What does it mean to be lawless? The Oxford dictionary describes it as one 'not governed by or obedient to laws; characterised by a lack of civic order.' By this definition the Bondurant brothers were undoubtedly lawless; lawless without restraint.

Based on the true story and novel by Matt Bondurant (the grandson of Jack Bondurant), Lawless sees the infamous and indestructible Bondurant brother's pushed beyond their limits. A gritty western period piece set during the prohibition, we witness the American dream turned outright war.

Upon the grand Virginian landscapes the brother's lives and loyalties are tested, narrated by youngest brother Jack he must hastily become a man in order to defend their livelihoods. Shia Lebeouf is convincing as wide-eyed Jack displaying vulnerability and gusto, his character arc central to the films progression. We see him develop on screen striving for the same level of strength and influence his brothers naturally possess. He even courts a love interest, the preacher's daughter Bertha played exceptionally well by Australian actress Mia Wasikowska (you will remember her from Tim Burton's, Alice in Wonderland).

Australians were certainly a heavy force in Lawless, Jason Clarke as wild and violent Bondurant brother Howard produced a memorable portrayal. Renowned and multitalented actor Guy Pearce as Charlie Rakes is menacing and the perfect demanding power hungry villain, pushing for anarchy at every opportunity. Not to mention the screenplay was written by passionate rock legend Nick Cave and directed by John Hillcoat (the two have previously worked together on music videos for 'Nick Cave and the Bad Seeds' and in film 'The Proposition'). Cave's influence in the film was evident; woven throughout were subtle musical reminders of his presence, lyrical tunes that complimented the tone of the picture.

Overall, the stand out performance of the film is most definitely Tom Hardy as Forrest Bondurant; thickly spoken, a man of few words, a man with conviction, indestructible and in control. 'We can't never die…nothing can kill us' he tells Jack 'it is not the violence that sets men apart, it is the distance that he is prepared to go' he commands screen with his hulking presence. Almost omniscient, in every scene he is distinctively compelling, you invest in their war, and you invest in his life. And you believe he truly is invincible.

By his side is mysterious maiden Maggie (Jessica Chastain) a Chicago runway dancer turned Virginian caretaker; she brings warmth to the Bondurant brother's bloody world. The performance by Chastain was superb, she is an actor's actor always authentic and versatile, and she breathes characters to life with ease.

Lawless was very well received during the recent film festival rounds and the cast performances live up to the excitement, driving the film forward while their character expositions set the pace. This is a film certain to entertain, with a few surprise quips appreciated particularly by the baby boomer's generation. It delivers the climactic finale in a slow simmer, they were brothers, and they were absolutely lawless; 'we don't lay down for nobody!'.
-Katya Hone