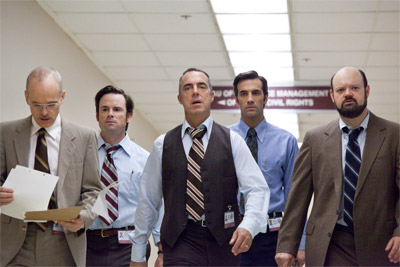 Synopsis: Based on true events, Argo is a dramatic thriller that chronicles the life-or-death covert operation to rescue six Americans, which unfolded behind the scenes of the Iran hostage crisis-the truth of which was unknown by the public for decades.

On November 4, 1979, as the Iranian revolution reaches its boiling point, militants storm the U.S. embassy in Tehran, taking 52 Americans hostage. But, in the midst of the chaos, six Americans manage to slip away and find refuge in the home of the Canadian ambassador. Knowing it is only a matter of time before the six are found out and likely killed, a CIA "exfiltration" specialist named Tony Mendez (Affleck) comes up with a risky plan to get them safely out of the country. A plan so incredible, it could only happen in the movies.

Verdict: Unlike anything I have seen before Argo takes grasp of the true story from 1979 where an Iran hostage situation had 52 Americans held captive for 444 days; we're indulged into the story of the six Americans who managed to slip away and are hidden within the home of the Canadian ambassador. Each day becomes riskier and more challenging for the six escapees and those surrounding the ambassador; CIA specialist, Tony Mendez knows an incredible and unbelievable plan needs to be developed to safety remove the six from Iran, undetected and that's when Argo is established.

Tony Mendez is tested when he is forced to fight against the authorities to prove his plan is the best of the bad. His strategy involves devising a fake Canadian film which is to be shot in Iran and in doing that smuggle the hidden six out as part of the production crew; Tony the associative producer uses his contacts to develop the phony film. Although it is seemingly irrational will it work to bring the hidden six escapees to America unharmed? Time is running out as the Iranian forces begin further investigation into the 'truth'.

Argo isn't like watching a Hollywood blockbuster, but a documentary that encapsulates you with pure suspense and that thrilling cinematic experience. Unbelievably traumatic yet obviously true Argo is packed with tension and is not only captivating because of its reality but because of Ben Affleck's ability to build uncertainty as a director and in his role of Tony Mendez.

Tension is partnered comprehensively with humour and the realism of the Iranian streets where men are being hung from building machinery and cars are being burnt in the street - no one is safe, especially Americans.

Tate Donovan is convincing in his role although unsettled his strength and invested dedication to the character influences an outstanding performance. Whilst the entire cast contributes to ensuring this film is an authentic success, Ben Affleck will blow you away, not just for his impressive and compelling acting but his spot-on directing style and ability to provide a complex and compelling film for all audiences.

Rarely do we see such an accomplished blockbuster with depth and the ultimate conclusion. This film has to be one of the best films of 2012.
Rating: *****


After years of being one of those actors that was hit and miss with people, who would have thought Ben Affleck would become one of the most sought after great directors in the industry. After his last film The Town received so much acclaim and award nominations everyone was wondering if it was just a fluke. His latest film Argo takes on the actual events during the Iran Hostage Crisis finds him once again taking on double duties with directing and starring, but can he bring these events to life and create another great film along with it?

Argo follows the unbelievable true story of six Americans that have found shelter with the Canadian ambassador in Iran when the revolution reaches a boiling point. The CIA works alongside some heavy hitters in Hollywood to create a fake film production to concoct a risky plan to try and get them out of the country. For a movie that focuses on a situation that was so dire and heavy, this film comes off a bit lighter than expected. Ben Affleck has crafted a brilliantly entertaining film on numerous levels. The story alone is intriguing watching their unbelievable plan come to life. During this time of the film it delivers some really funny moments, without falling to far off track and confusing the kind of film this is. The acting here is top notch with everyone involved, including Affleck himself delivering some awesome performances. The dynamic between Affleck and Breaking Bad star Bryan Cranston is perfect creating a duo that both entertain as well as keep this story on track. The biggest treat in this film are brilliant and a lot of time funny performances from John Goodman and Alan Arkin. These guys really bring all the Hollywood aspect to the film to life while delivering Oscar worthy performances that will hopefully be recognized. The gritty look to this film really helps to capture the vibe and tone of the film while combined with the attention to detail, helps take you into the time period it takes place.

Brilliant directing, acting, story and some fun sci-fi references throughout takes Argo into the realm of one of the best films to come along in some time. Affleck proves once again of his talent as a director and that The Town was no fluke. This is a must see film that will no doubt be all-the buzz when award season comes around and deserves every bit of it.