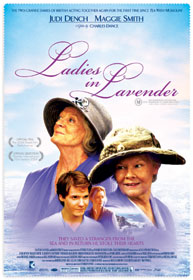 The Story Of Two Sisters Who Saved A Stranger, And The Stranger Who Stole Their Hearts

Rising German talent and award-winning Daniel Brühl (Goodbye Lenin!) plays Andrea. A gifted young Jewish violinist from Krakow, Andrea is bound for America when he is swept overboard by a fierce storm. When the Widdington sisters discover the handsome and mysterious stranger on the beach below their house, they nurse him back to health. However, the presence of the musically talented young man disrupts the peaceful lives of Ursula and Janet and the community in which they live.

'Ladies in Lavender' is a bittersweet story of two sisters (Judi Dench and Maggie Smith) who live together in a quaint English fishing village, find a young man washed up on the beach beneath their house, take him home and help to rehabilitate him from his near death. As they soon discover, the man is not English which means overcoming a language barrier as they try to discover just who this mystery man is, where he came from, where was he going and more importantly, what are they going to do with him.

Charles Dance makes his directorial debut, also writing the screenplay from a story by William J. Locke, and slowly but surely reveals a beautifully told story of love and communication. Dance elicits such superb performances from Dench, Smith and also Miriam Margolyes who plays Dorcas, the housekeeper to the Widdington sisters. The interaction between Dench and Smith, as two sisters who live together, even sharing the same bedroom, is a pleasure to watch as they try their damnedest to win the heart of their new houseguest, Andrea Marowski (a comfortable Daniel Brühl). Slowly, Ursula (Dench) begins to fall in love with Andrea, which brings emotions to the surface that she finds hard to deal with, ultimately leading to her finding some solace through violinist Andrea's music. Watching Dench deal with these feelings is heartbreaking and a testament to her talent. By the way, Brühl does an excellent job of "playing" the violin - something that is often neglected in movies where a character performs with a musical instrument. Natascha McElhone plays Olga Daniloff, a visiting artist who provides the subject matter for a subplot involving Andrea and the local doctor, Dr. Francis Mead (David Warner)

Never overstated, this is a refined and polished movie, where the contrast of the personalities of the Widdington sisters, is offset by their matter-of-fact housekeeper Dorcas, who manages to impart some humour, albeit unintentionally. The final scene felt a little rushed after all the effort leading towards it and was a tad disappointing - more of the aftermath of Andrea's tenure was needed - but this is getting very picky in an otherwise contemplative and delightful movie.

Just to see the two Dames of British stage and screen together (again) is a privilege.